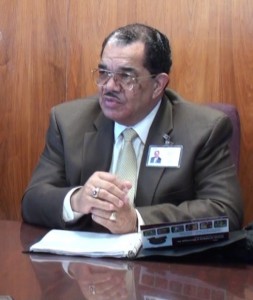 The Friends of Children of Mississippi (FCM), with its executive director from its inception Dr. Marvin Hogan still at the helm, celebrated its 46th Anniversary Monday, Oct. 15.

“Forty-five years ago, there appeared to be very little concern about poor children and families, and Head Start services were not readily available,” said Hogan, in assessment of the four and a half decades he personally has dedicated to child welfare.

“Nowadays, more attention is given to the importance of early childhood development and education,” Hogan explained, “not only on school success but also on the economy.”

According to FCM statistics, 90 percent of the 3 to 5-year-olds served by its Head Start program come from low income families in rural areas throughout Mississippi.

Poverty levels, the lack of access to resources and health of the pregnant mother are factors that determine the fate of the child and are the focus of FCM services.

Initially, FCM only provided comprehensive early childhood development services during its formative years. But over the past 45 years, it has expanded its reach to impact the wellbeing of pregnant women, including their ability to acquire education and become gainfully employed. Home stability is impacted by job stability.

One hundred percent of the pregnant women enrolled in its Early Head Start come from low income families across racial lines – blacks, whites and Hispanic. Most are single-parent households headed by women. Ten percent have to cope with some form of disability.

This program targets prenatal care for the 0- to 3-year-old child and the mother, affording opportunities for a healthier birth and treating parents as the primary educator of the child.

Thus, FCM parenting education addresses the health of the mother and child, mental health, nutrition and disabilities. The agency has facilitated parents going to college and acquiring specialized training, with 750 successfully completing the program and 90 percent securing employment or starting a business of their own. Of this group, 187 are parents of children served in the Head Start/Early Head Start programs.

Along with Head Start and Early Head Start, FCM has expanded to include the TANF To-Work-and-Ownership (T.W.O.) project, the Employee Assistance Program and the SBA non-profit Microloan program.

There are 820 individuals on the waiting list to enter the T.W.O. training in the Mississippi Delta. Job training and placement are in six primary areas: certified nursing assistant, child development associate, phlebotomist, computer service technician, brick mason and carpentry.

Although starting out in its first 18 months with no federal or state funding, FCM over the past 45 years has transitioned 138,000 children from meager conditions into Mississippi public schools with a better chance at succeeding on their educational journey.

Upon entering kindergarten, the FCM children show improvement in understanding spoken English with a better vocabulary, letter recognition and early math skills, scoring at or above the national average. The children are given a sense of self-confidence, an elevated image of self beyond their impoverished home environment and limited resources.

The 501(c)3 agency is required to be in compliance of 2,289 applicable Head Start Program performance and policy standards. It has 945 employees with emphasis on their own advancements in education.

Where would Mississippi children be without Head Start? Fortunately, 138,000 children do not have to answer that question. An ongoing assessment system shows that these 3- to 5-year-olds start public school with improved language development, greater ability to succeed in literacy, mathematics, science and creative arts, and with greater social and emotional development.

From its headquarters at 6425 Lakeover Rd., in Jackson, FCM operates in 15 counties.

For more information on enrolling in its services or assisting with its mission, call 601-321-0960.

Coming Next Week in The Mississippi Link: an interview with Dr. Marvin Hogan. For more on this story, go to www.themississippilink.com

By Monica Land JACKSON – In a surprising turn of events, a 19-year-old white teen from Brandon has pleaded guilty to murder and committing a hate crime for running over a black man with his […]

JPS given more time to right a wrong

District has until Nov 1 to make improvements By Othor Cain Managing Editor Monday, May 21, proved to be a very busy day for officials within the Jackson Public Schools District. Board members called a […]

The Hinds County Republican Party and the county’s only white supervisor are suing four black county supervisors, charging race was used improperly as a factor in redrawing district voting lines.