Hundreds from around the State of Mississippi poured into Jackson this week for the 123rd Annual Session of the General Missionary Baptist State Convention.
According to convention staff, there are approximately 1,000 adults and 800 youth in town for the faith-based event. This year’s theme is “Envisioning the Future with High Expectation, in Jesus Christ.”
The Mississippi Link caught up with the convention president Rev. Isiac Jackson Jr. at the Marriott (convention headquarters) Tuesday, July 17, and asked whether the convention has taken a stance on the national issue of same-sex marriage since President Barack Obama publicly shared his views on the matter.
Jackson said that the state body embraces the statement made on the issue by its National Baptist Convention USA President, Dr. Julius R. Scruggs, who was in town Wednesday night, July 18, to deliver the sermon for the convention’s “J.H. Jackson & David Matthews Night.”
In his posted website statement, Scruggs stated: “the National Baptist Convention (NBC), USA, Inc. affirms that marriage is a scared biblical covenant between a man and a woman.” (Visit www.nationalbaptist.com). 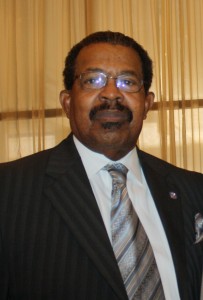 Jackson, who pastors a Canton, Miss. church, said, “Yesterday, according to the Word of God, same-sex marriage was wrong. Today, according to the Word of God, it is still wrong. And, when we talk about morality, if we embrace the Word of God, the nation cannot go wrong.”
When referring to God’s Word on this issue, many ministers cite the scriptures from Book of Leviticus, Chapter 18 which deals with instructions given to Moses by God on Mount Sinai. Among those instructions are a number of sexual activities which are considered ‘unclean’ or abominable.
In reference to President Obama’s views, Jackson was quick to point out that, “We don’t condemn President Obama. President Obama has to hold up the United States Constitution for all the people of the nation. “We have to hold up the principles of the Bible.”
He stressed that he supports the national body in its efforts to encourage everyone to pray for the president. He cautioned people not to be become blindsided by this one issue. “The President has done a lot of great things,” Jackson said. He cited reforming healthcare, bringing the military troops home from Iraq, turning around the U. S. automobile industry, expanding Pell Grant spending, expanding health care for children and more.
Civil rights activist and Maryland legislator Emmett Burns, a Jackson native, was also in attendance at the convention Tuesday morning July 17. He also shared with The Mississippi Link his thoughts on same-sex marriage.
These are his comments:
“There are people who see it and explain it as a civil right…If you take the church out of the mix, everything else crumbles. And, it is the responsibility of the church, the convention to keep the church as the foundation. We have become, the church has become too silent. The legal system, the judges are determining morality for us. We can’t determine legality for them, so we must not let them determine morality for us. For the first time, with this same-sex marriage business, I see the church awakening in a way that it has not in the past.”
According to its website, the NBC has joined forces with the NAACP to promote the vote in November 2012. The partnership focuses on voter protection, voter promotion and voter participation.
The GMBSC continues through Friday, July 20. Attendees say the convention is packed with useful Christian education classes, workshops, seminars and exhibitors. Some of the classes have such titles as “Preaching using creativity. It also included a youth concert featuring gospel recording artist Kierra KeKe Sheard.
State General Missionary Baptist President Jackson delivers his annual address Thursday night, July 19, at the Marriott.

By Monica Land OXFORD – A housing executive convicted of embezzlement has officially been fired from her job with the South Delta Regional Housing Authority (SDRHA). Ann “AJ” Jefferson, who embezzled from her employer and […]

Interim Managing Editor
Over the past 19 years, The Mississippi Link has not missed a week of reporting on impactful events in the state and across the nation. The year 2012 in review shows a continuation of this commitment to bring to its readers the news and views that have shaped the lives of Mississippians and beyond. Out of 52 weeks of continuous publication, we now reflect on the top 20 headlines of 2012…. […]

July 17, 2014 Online Editor News, The Buzz Comments Off on 4 more indicted on hate crime charges in 2011 attacks on blacks in Mississippi

JACKSON, Mississippi (AP) — Four more people have been indicted in what prosecutors say were a series of racially motivated attacks on blacks in Mississippi. John Louis Blalack, 20, of Brandon; Sarah Adelia Graves, 21, […]