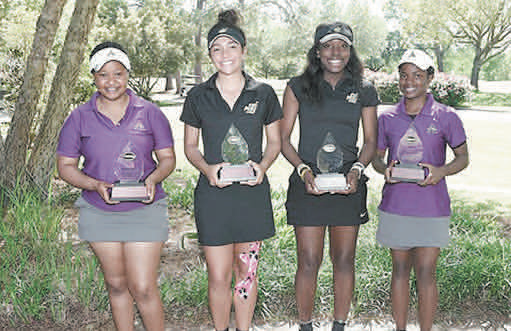 The Lady Braves registered a pair of top-10 finishes. Junior Ouname Mhotsha placed sixth with a 161 (+17) score, while freshman Celestine
Nawa ended in eighth after carding a 167 (+23).

As a result, both Mhotsha and Nawa landed on the All-Conference Second-Team. Alcorn was without its No. 1 golfer Jahaanvie Walia who had to withdraw due to injury. The freshman came in with a team-best 78.4 scoring average per round.

“We played in very tough conditions that included high winds, slick greens and tough pin placements. With our No. 1 player Jahaanvie out
with a rib injury and only four players it was going to be a long shot for us at best,” said head coach Kent Smith. “Congrats to Ouname and Celestine for earning All-Conference. They have a high ceiling for next year and can be very good players.”

Junior Sammye Schroer showed tremendous improvement over the course of the season and turned in a 194 (+50). Senior Abrea Granttallied a 198 (+54) in her final appearance as a Lady Brave. “Sam and Abrea got so much better this year. They worked so hard and
gave it their all. That’s all a coach can ask for,” Smith said.

The men’s team is also in action and has one more round to play tomorrow.

Alcorn State University President M. Christopher Brown II continues to be recognized as a pioneer leader and Saturday, June 28, at the Center for HBCU Media Advocacy’s third annual HBCU Awards he captured the title of Male HBCU President of the Year.

Myrlie Evers-Williams, a distinguished scholar-in-residence at Alcorn, was honored as Female HBCU Faculty Member of the Year. She teaches social justice seminars, advises senior research papers, and interacts individually with students, encouraging them to succeed in their studies and passion for social justice and equality. […]

Medgar Wiley Evers had big dreams when he arrived on the campus of Alcorn A&M College in the summer of 1948.  It is likely that those dreams involved becoming an All-American football player, participating in campus activities, and ultimately earning a college degree.  It is hard to imagine that his dreams were enormous enough to predict the phenomenal impact his life and legacy would have on the United States and the world.

Yet, half a century after his untimely demise, thousands of Americans will journey to Mississippi to commemorate one of the foremost leaders in American civil rights history.  […]

Alcorn State (7-2, 5-1) almost scored on Southern’s opening possession in OT when Jestin Williams returned an interception 88 yards but he was tackled on the 4-yard line… […]