WASHINGTON, D.C. – As many across the nation remain in shock and disbelief at the recent verdict in the death of 17-year-old Trayvon Martin, his case has become hauntingly reminiscent of another black teenager gunned down nearly 60 years ago, where his accusers also went forth free.

The murder of Emmett Till is just as relevant today as it was in 1955 when his death not only sparked an avalanche of public outrage and fear across the south. But it also gave courage and determination to the weary and downtrodden – now wiling to die for equal rights.

When A. Philip Randolph and Bayard Rustin organized their monumental March on Washington for Aug. 28, 1963 – the same day Emmett Till was murdered – historians say that was not by coincidence. But it was because of Till that Aug. 28 was chosen.

The death of that 14-year-old boy eight years earlier was still fresh and burning in the heart and minds of Black America.

The notion that two white men from Mississippi could brutally torture and murder a young black boy – and get away with it – echoed the call for justice that many blacks had been sounding all along. Especially in the state of Mississippi.

Randolph and Rustin knew that.

And while the primary purpose of that march was to ensure civil, economic and voting rights for black people across the nation, Mississippi was at the fore being internationally criticized for their racially charged violence; their Jim Crow laws and the assassination of civil rights activist Medgar Evers in their capital city on June 11, 1963.

Fifty years later, as thousands attended the anniversary of that historic march on Saturday, Aug. 24 – including the parents of Trayvon Martin – many believe Till’s death remains an integral part of the fight for civil rights.

“You can not talk about the March on Washington without Emmett Till,” said New York-based filmmaker Keith Beauchamp. “Because of the Trayvon Martin tragedy, everyone is summoning Emmett Till, bringing him back, speaking about him and comparing Trayvon Martin’s death to his.”

Beauchamp, producer of the award-winning film “The Untold Story of Emmett Louis Till”, attended the March on Aug. 24, and showed a screening of that film at a local venue in D.C. on Aug. 23.

An avid historian, Beauchamp currently has a series on the Investigation Discovery Channel entitled, “Injustice Files”, in which he investigates cold case murders from the civil rights movement.

“Many believe Emmett Till’s murder galvanized the modern day civil rights movement,” he said. “That’s why 1955 is so significant when you talk about the civil rights movement or the black resistance movement in the United States. Rustin understood that [Till‘s] was a shocking case and he was able to see people gathering together and fighting injustice. And he wanted that same type of feel with the March on Washington.”

Beauchamp said the Brown vs. Board of Education decision in 1954 “set up the atmosphere” for Till to be murdered. And two other killings in Mississippi – Rev. George Lee on May 7 and Lamar Smith on Aug. 13 – led to what some called the bloody summer of 1955.

Four months later, on Dec. 1, 1955, a humble NAACP worker in Montgomery, Alabama refused to give up her seat on a crowded bus, largely in part because of the recent murders in Mississippi.

“The real reason Rosa Parks didn’t get up from her seat that day wasn’t because she was tired like everyone wants you to believe,” Beauchamp said. “But it was because she had Emmett Till on her mind and she was tired of what was happening.”

Aside from being the inspiration behind Parks’ decision and the subsequent passing of the Civil Rights Act of 1957, Till was also the reason the Federal Bureau of Investigations (FBI) launched its Civil Rights Division.

“This was one of my major arguments to the federal authorities in getting Emmett Till’s murder case reopened,” Beauchamp said. “I said to them, ‘How can you not investigate a case that actually helped start the Civil Rights Division?’ But I never felt that Emmett Till‘s spirit would die. Metaphorically, it continues to come up in any generation when you talk about the injustice of young black men.”

Anthony Witherspoon, Chairman of the Criminal Justice Committee for the NAACP in Mississippi, agrees.

“I do see a correlation between Emmett Till and Trayvon Martin,” he said. “It brings to question, ’What is the value of black life by our white brothers and sisters that we have to live with in this country?’ Because there does not seem to be the same type of effort to bring forth justice when black life is snuffed away in an obvious heinous and unjust way. Had Trayvon been white as everyone is saying, we wouldn’t even be having this discussion. Or if Zimmerman had been black and Trayvon was white, justice would have been swift and quick. Trayvon’s life to that jury had no more value than Emmett Till’s did to the jury that didn’t see the value of his life.”

Born and raised in McComb, Miss., a town rich in civil rights history, Witherspoon heard the story of Emmett Till all his life and witnessed discrimination first hand as his father, the first black licensed car dealer in McComb and the first black elected official in Pike County, faced harassment and violence on a continuous basis.

“This march [was] too important for Mississippi not to attend,” he said, “given that the most oppressive type of laws involving voter suppression, felony disenfranchisement and dismantling public schools to fund charter schools exists here. Mississippi, second only to Louisiana, incarcerates more of their citizens per capital than any other state in the union. So, along with that goes the collateral consequences of felony disenfranchisement. We are a state that has some of the most egregious type of laws in terms of civil rights, and so again, it is necessary for Mississippi to be represented at this march.”

Mrs. Myrlie Evers-Williams, former chairperson of the NAACP, and widow of Medgar Evers, attended the march on Saturday. Evers was slated to speak at the original march on Aug. 28, 1963 – some two months after husband’s assassination – but was unable to because of a prior speaking engagement. Evers-Williams told the audience Saturday, that was a disappointment that she was never able to forget.

Derrick Johnson, the State President of the NAACP for the State of Mississippi and a member of the National Board of Directors attended the march.

“We [had] one full bus and several cars that our local NAACP units…organized to attend,” Johnson said. “And there [were] others who [went] by different modes whether by plane or train.”

Johnson said many of those who attended the march were adults and members of the local branches of the NAACP.

Johnson said due to open enrollment for many of the state’s colleges and universities, the timing of the march ddid not allow for more students to attend.

“Many students [were] returning to school [that] weekend and the next,” he said. “So their participation, I believe, [had] more to do with that than with a lack of interest.”

“That’s the case with my son,” Witherspoon said. “He’s a freshman at Tougaloo College. But I regret that this bus [was] not packed with 50 percent of the passengers being young people. That’s something that we’re seriously going to have to work on and that’s passing the torch.”

“There are a lot of young people out there that just don’t know our history,” Beauchamp said. “And we have a lot of elders from that period that are disappointed that no one out there has really grabbed the baton and moved ahead with it.”

“This march [was] just as important now as it was back then,” he said. “The march then was about civil rights, poverty and the right to vote and we are still plagued with those same issues today.”

On June 25 of this year, the Supreme Court took the power of voting and election rules from the federal government and returned it to states with a history of racially charged crimes – like Mississippi – basically overturning the Voting Rights Act of 1965.

This means by June 2014, Mississippi voters will have to show ID to vote in the federal primaries. 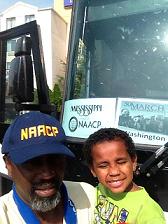 “This has set us back 50 years,” White said. “And so there is a new struggle in terms of trying to prevent the clock from being turned back. So we need to go and represent and advocate for a more positive and progressive society. Too many people have died for us to have the rights we have for us to sit idly by and watch them be taken away. My son may not understand that now. But in the future, he will be able to look back on that moment as a pivotal point in our history.”

“I’m really frustrated with this generation,” Beauchamp said. “Because a lot of us know the [civil rights] history and there is no time to reinvent the wheel and we don’t have to reinvent the wheel because what’s been done in our past has proven to be successful. We just need to use the same things of our past along with today’s tools to help move things along. This is why this march is important.”

“I think people who attend this march should attend with an open heart and understanding that we have achieved so much and that the only time we lose in these struggles is when we don’t fight,” Johnson said. “I hope this march ignites the sprits of those who attend to understand that we are in a fight. That freedom is an accomplished struggle. And that we can’t bask in the sun of a gathering with hundreds of thousands of people and then go home and sit down.

The work actually [began] the day after, the 25th. And if we…come back and continue to fight for human dignity – for all people then that is the true measurement of the success of the march.”

“We are extremely proud for Professor Myrlie Evers for adding another coveted award to her array of honors,” stated Alcorn President M. Christopher Brown II. “We are grateful for everything Mrs. Evers is doing for the nation and for her invaluable contribution as faculty at Alcorn.” […]

Alcorn State University President M. Christopher Brown II continues to be recognized as a pioneer leader and Saturday, June 28, at the Center for HBCU Media Advocacy’s third annual HBCU Awards he captured the title of Male HBCU President of the Year.

Myrlie Evers-Williams, a distinguished scholar-in-residence at Alcorn, was honored as Female HBCU Faculty Member of the Year. She teaches social justice seminars, advises senior research papers, and interacts individually with students, encouraging them to succeed in their studies and passion for social justice and equality. […]

Luter, the first black president of the convention, was in Jackson for the 177th gathering of the Mississippi Baptist Convention. After delivering a sermon at First Baptist Church of Jackson, Luter told reporters his selection as president shows a commitment to increasing diversity, but he said there’s more to be done. […]