Republican presidential candidate Mitt Romney said, “There are 47 percent of the American people who will vote for the president no matter what…, who are dependent upon government, who believe that they are victims, who believe the government has a responsibility to care for them, who believe they are entitled to health care, to food, to housing, to you-name-it.” 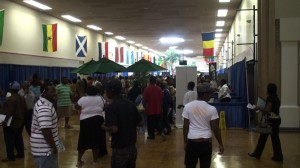 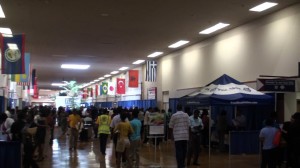 Perhaps Romney should have attended the Sept. 26 (and last year’s) 2nd Annual Jobs for Jacksonians Job Fair and Business Engagement Summit held at the Jackson Medical Mall on Woodrow Wilson Blvd. In this city of over 75 percent African Americans, there were job seekers who filled the Mall’s hallways stretching over a block long and standing or passing nearly elbow to elbow.

They were filling out applications being offered by employers like CRW truck drivers, Comcast Cable-Jackson, Harrison Manufacturing, Mississippi Department of Corrections, U.S. Army of Engineers, the Jackson Police Department, McDonald’s and Little Caesar’s Pizza. There were 94 employers and institutions of higher learning with representatives on hand.

Jobs for veterans were featured throughout the halls. Dress for Success Metro Jackson was available to give assistance in making the right presentation in a job interview and to customize resumes for different positions. United Way of the Capital Area conducted the Business Engagement Summit, offering more tips on job preparedness to local high school students.

The Job Fair extended its hours this year to accommodate the expected huge turn out, opening at 9 a.m. and going until 5 p.m. By 11 a.m., city calculations showed that nearly 600 people had already come through looking for work and other services.

Jackson State University, Tougaloo College and some of the state’s community colleges were on hand with employment information as well as opportunities for job seekers to improve their educational standing. If someone did not complete high school, for example, Tougaloo  College offered information on obtaining a GED.

Louis Armstrong, deputy director of the city’s Human and Cultural Services, said he was encouraged by the tremendous turnout. “We are focusing on making sure that the citizens of Jackson have an opportunity to be employed. And we established this job fair to provide them that opportunity,” said Armstrong.

Extra parking had to be provided at the Old Farmers Market and all the way down to Medgar Evers Blvd.

For anyone who could not make it to the one day job fair, Armstrong said there is a registry of 100 plus employers on file with the City and people can still file applications. For more information on those job opportunities, call 601-960-0335.

Armstrong said plans for next year’s job fair will begin at the close of this one. The annual job fair, according to Mayor Harvey Johnson Jr., is the city’s effort to decrease the number of unemployed citizens within Jackson.

For more coverage and video report of the city’s job fair, go to www.TheMississippiLink.com

Inmate testifies he was raped twice behind bars

JACKSON, Miss. (AP) – An inmate in Mississippi’s prison system testifying in a federal lawsuit over prison conditions says he was sexually assaulted twice behind bars in less than a year. The man, identified as […]

The Mississippi Highway Patrol’s Bureau of Investigation, along with the Tunica Police Department and the Tunica County Sheriff’s office, has arrested a man in connection with the north Mississippi highway murders.             “Hundreds of man […]

The Associated Press The fungus that causes a deadly bat disease has been found for the first time in Mississippi, though the disease itself has not been found there. The fungus was in samples collected […]