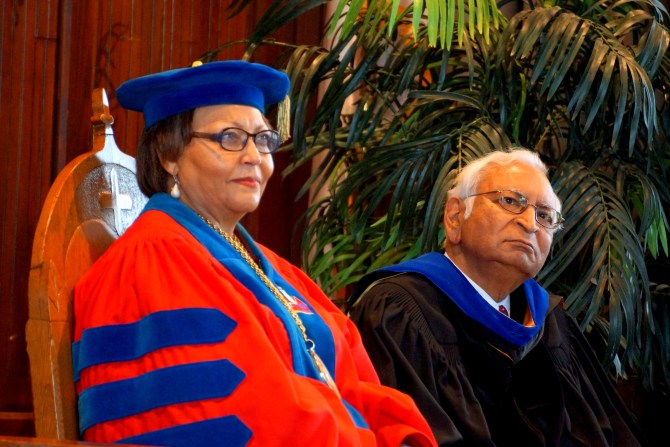 Eugene M. DeLoatch, W. Randall Pinkston, and Bobby Rush will receive the degrees during commencement, scheduled for Sunday, May 7 at 10 a.m. on the Tougaloo campus.

“We are pleased to recognize our honorary doctorate recipients, all of whom are extraordinary individuals. They have immense achievements and made impactful contributions to society. We are honored to add them to our list of distinguished alumni.” – Beverly W. Hogan, president of Tougaloo College.

Eugene M. DeLoatch earned a B.S. degree in mathematics and electrical engineering from Tougaloo College and Lafayette College (PA) respectively. He also holds the M.S.E.E. and Ph.D in bioengineering from the New York Polytechnic Institute University.In February 2017, DeLoatch was named Black Engineer of the Year by the Career Communications Group. DeLoatch has spent many years as an educator and researcher and remains committed to promoting engineering to young people with particular emphasis on individuals from groups that are underrepresented in the engineering profession.

Over a ten-year period, DeLoatch’s degree granting programs at Morgan State University led the nation in the production of African-American electrical and civil engineers at the baccalaureate level. DeLoatch is a member of Alpha Phi Alpha Fraternity, Inc. and the recipient of numerous awards and recognitions. He is a life member of Tougaloo College National Alumni Association and a generous philanthropist. DeLoatch has consistently supported Tougaloo College’s Annual Fund by contributing over $90,000.

Randall Pinkston has spent four decades as a New York based reporter, anchor and producer in local and network news operations for the past 34 years. He began his broadcast journalism career at WLBT-TV Jackson, Miss. Prior to that he worked as an announcer at WJDX-FM Radio in Jackson. Pinkston is known for his journalism work around mental illness, physically handicap, AIDS in the African-American community and advancing the roles of women and people of color in the media.

The last recipient, Bobby Rush was born Emmet Ellis Jr. in Homer, Louisiana. He adopted the stage name Bobby Rush out of respect for his father, a pastor. He is 83 years old but exudes the energy of a 20 year old; make no mistake Rush is not your typical octogenarian. He has been honored with three Grammy nominations, as well as 41 nominations and 10 awards from the Blues Foundation, and the 2006 induction into the Blues Hall of Fame.

Rush has always been known as a prolific and clever songwriter. And just this year he won his first Grammy for “Best Traditional Blues Album” for the album Porcupine Meat, a testament to brilliance, which presents him at his very best and does not try to be anything that he is not.