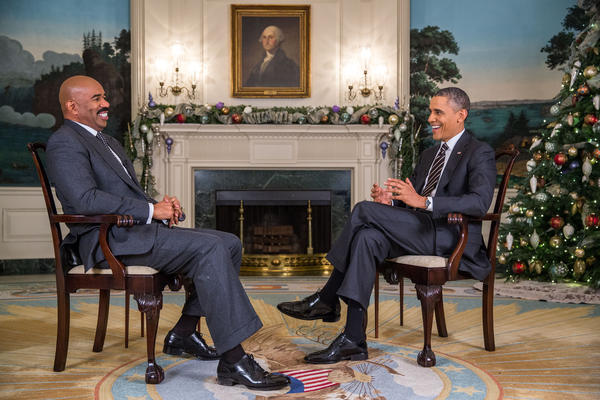 Steve Harvey has capped off his Christmas holiday with a professional highlight.

Harvey steered clear of politics with Obama in order to focus on family, fatherhood and the politician’s plans for the holidays.

Harvey’s interview with Obama comes as the syndicated radio show host is riding a wave of success with four-week ratings high for his self-titled daytime talk show. According to reports, the series has upwards of 2.5 million daily viewers.

“Sitting down with the President is something I’ve always dreamt of doing, and I am honored to have the opportunity,” stated Harvey in a press release. “I’m grateful to President Obama for welcoming me and I’m thrilled to share this experience with all my viewers.

The photo, criticized by some for injecting inappropriate levity into a memorial service, was “perfectly fine,” Harvey said.

WASHINGTON (AP) — Addressing one of education’s most divisive issues, President Barack Obama on Saturday called for capping standardized testing at 2 percent of classroom time and said the government shares responsibility for turning tests […]

WASHINGTON (AP) — President Barack Obama awarded the nation’s highest civilian honor to 21 groundbreaking actors, musicians, athletes and innovators who inspired him over the years and “helped make me who I am.” “Everybody on […]

May 2, 2014 Online Editor Health Comments Off on Mississippi figures show 61,494 have enrolled in Obamacare exchanges

JACKSON, Mississippi (AP) — New figures show 61,494 Mississippi residents have signed up for private health insurance using a federal government website, out of more than 117,000 who were eligible. The U.S. Department of Health […]