JACKSON – Details continue to emerge into the shooting death of a Jackson police detective and the suspect he was questioning. Detective Eric Smith, 40, was killed in the line of duty early Thursday evening while questioning 23-year-old Jeremy Powell. Powell was being charged with April 1 murder of Christopher Alexander.

Alexander was found dead on Greenwood Avenue near Daniel Lake Boulevard early April 1. He had been stabbed to death.

The Associated Press (AP) said authorities have a video from the police interrogation room that shows Powell shot Smith to death before killing himself with the officer’s gun.

Powell, was not handcuffed during questioning, a person told the AP on the condition of anonymity because they were not authorized to talk about the ongoing investigation.

Around 5:40 p.m., Powell overpowered Smith, took his gun, shot the veteran detective four times before shooting himself in the head inside a third-floor room of the department’s headquarters, the Mississippi Bureau of Investigation said.

Other officers heard the shots ring out and rushed to the interview room, but both men were dead.

Immediately after the shooting, Jackson Police Chief Rebecca Coleman, her voice trembling as she spoke, said very little by way of a statement to the media Thursday night. But confirmed Powell had been arrested earlier that day.

“He was a murder suspect,“ she said. “We brought him to police headquarters and he was being interviewed on the third floor of the police department. We later heard that shots had been fired and on arrival we found the suspect is deceased and we have a police officer that’s deceased.” 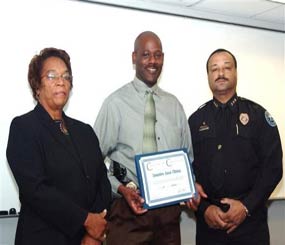 “It’s a very tragic situation that we’re dealing with right now,” Assistant Police Chief Lee Vance said prior to a news conference. “And we don’t have a lot of answers.”

That apparently was before police reviewed the surveillance video.

The AP has asked for the video to be released under open records laws, but authorities have not responded to the request.

Ken Winter, executive director of the Mississippi Association of Chiefs of Police, said it’s not unusual for a suspect to be unrestrained during questioning.

“It depends on the demeanor of the individual at the time. I would assume that the detective had no reason to believe this guy was aggressive or he wouldn’t have been interviewing him in the first place,” said Winter, who spent 36 years in law enforcement as a police chief, a detective and as director of the state crime lab.

Winter also said it’s not uncommon for an officer to be armed during an interrogation.

“I don’t think this detective was doing anything out of the ordinary. Sometimes you can do everything right and it still turns out bad,” Winter said.

Smith, 40, is survived by his wife, Eneke, a sergeant with the Jackson Police Department, and two sons.

A murder suspect being interviewed at the Jackson police headquarters shot a detective Thursday and those who came to investigate the gunfire found both men dead, authorities said.

The suspect, who was not identified, was being questioned on the third floor of the building when the shooting happened, Police Chief Rebecca Coleman said.

Police did not release any details on the sequence of what happened but scheduled a news conference for later Thursday night.

The officer was identified as Eric Smith, a homicide detective. […]

A young Jackson couple is preparing to bury their toddler, struck down by a stray bullet from a hail of gunfire this weekend.

The child’s family is grateful the shooter came forward but still struggling to come to grips with the sudden loss of her innocent life. […]

A former Memphis, Tenn., police officer who was involved in a fatal crash that killed two Mississippi residents – a mother and daughter – has been indicted.

The former officer, 24-year-old Alex Beard, is charged with vehicular manslaughter in the Aug. 26 crash that killed 54-year-old Delores Epps and her daughter, 13-year-old Mackala Epps.

Beard was responding to a call in his marked police car on Aug. 26 when he struck the passenger side of a 1996 Mercury Mystique that was trying to turn left. He did not have his lights or sirens activated when the crash occurred. […]