STARKVILLE – Fire crews were still on the scene late Wednesday night looking through the rubble of a house that was fully engulfed in flames when they arrived. 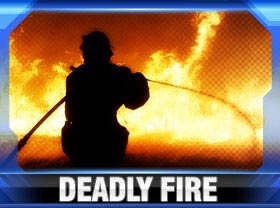 Four people were at the home on Blackjack and Bardwell Roads in Oktibbeha County, when a blaze broke out in the back bedroom.

Authorities said when they arrived, an elderly man, suffering from dementia, was in the backyard.

“It is unclear whether he was really involved in the fire itself. He was not injured in the fire. He was outside watching the fire when I got here,” Oktibbeha County Fire Coordinator Kirk Rosenhann, told WTVA.

The man was transported to OCH Regional Medical Center.

Firefighters said unaccounted for was a 92-year-old disabled woman, her 24-year-old grandson and 45-year-old Geraldine Rice, her caregiver.

Rice was also a volunteer firefighter for Oktibbeha County.

“We will not stop until we complete the operation” said Rosenhann.

The old wooden home continued to re-ignite forcing the rescue workers to deal with several obstacles.

“It had a great deal of interior furnishings, and there is an indoor swimming pool. Because of the magnitude of the debris, we brought in a county owned backhoe.”

The cause of the blaze remains under investigation and the recovery efforts continued.

On April 25 and 26, 2013, the Mississippi Young Professionals (MSYP) will host the MSYP 2013 Summit, Rethink Mississippi: No Suits, No PowerPoints, No Bull, at the Mississippi State University Riley Center, located at 2200 Fifth Street in downtown Meridian.

The event, coordinated by the Mississippi Development Authority (MDA), will launch the first year of MSYP, a non-profit organization designed to connect the state’s existing young professionals and YP organizations in order to create a network that will develop, empower and retain young professionals in Mississippi. MSYP’s 19-member board is comprised of business leaders in their 20s, 30s and 40s from each region of the state. […]

Mississippi State will begin a $75 million expansion of Davis Wade Stadium, with the project expected to be finished ahead of the 2014 season.

The school announced that the expansion will add more than 6,000 seats to the existing stadium, pushing the capacity to 61,337. It also includes plans for a second high-definition video board, premium seating, restrooms and concession stands. […]

Bulldogs inconsolable after coming up short again in final

By MITCH STACY COLUMBUS, Ohio (AP) — Mississippi State coach Vic Schaefer walked away from the team’s locker room with one arm around the shoulder of his weeping daughter Blair and the other arm draped […]