The ceremony for the 2021 Undergraduate Class of Jackson State University was held at 9 a.m., Saturday May 8, at Veteran’s Memorial Stadium in Jackson, MS. The keynote speaker was U. S. Mississippi Congressman Bennie Thompson, 2nd District. There were hundreds of attendees present and the ceremony was also live streamed.

Thompson said to the students, “For the past four, five, six and maybe seven years you have struggled to get to this day and all the late nights and early mornings have paid off.” He told the graduates that they represented the hopes and dreams of those in the audience that were proud of them for the momentous milestone they had reached.

On the eve of Mother’s Day 2021, Thompson said, “You have the great responsibility to never forget to whom much is given much is required. Your responsibility is greater because of the world that is presented before you.”

He reminded the graduates that Breanna Taylor, Dante Wright and others were all their age when they died at the hands of local police officers. “The system has a long way to go before we are all treated equal, so be careful. Use your faith in God and the knowledge you have gained to create a path for yourself to succeed.” 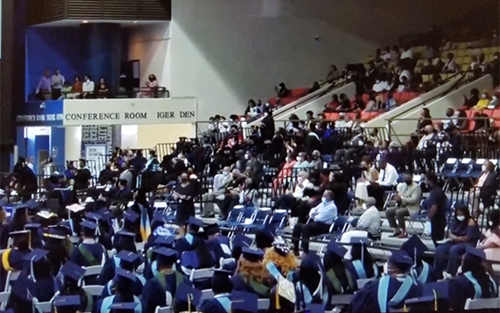 Inspired by the words of Thompson, India Fuller, upon receiving a B.S. degree in mass communications, said, “I am so proud that I graduated from a Historically Black College and University institution. (HBCU) Not only because it is a HBCU, but because it is Jackson State University. JSU gave me all the necessary resources I needed to be on the right path with my career in media journalism.”

Fuller referred to her recent internship with The Mississippi Link Newspaper, where former editor Gail Brown, who received her Ph.D May 5 from the University of Southern Mississippi, worked as a consultant to “The Link’s” interns. Fuller said, it was such an honor to be able to write for a black-owned newspaper company. I learned so much from Dr. Brown and The Mississippi Link staff.”

Javone Williams graduated in media production under the mass communication and journalism umbrella. Currently, Javone, who is 27 years old is working at a local hotel and the Boys and Girls Club where he teaches a photography class. He said, “I feel so free having finally completed my bachelor’s. Being 27, I was in school longer than I expected, but I ultimately figured it out. First picking up a DSLR camera in 2017 molded my journey into photography and media production, which gave me the perfect reason to go to Jackson State.”

A separate ceremony for the 2020 graduate and undergraduate classes was held Saturday evening at Veterans Memorial Stadium at 6 p.m. The keynote speaker was Jordon Jefferson, president of the 2020 JSU student body. Jefferson is currently pursuing a master’s degree at Harvard University, another HBCU.

JSU also had a ceremony for its’ 2021 graduate students and the 1971 Golden Diploma graduates. It was held Friday morning at 9 a.m. at the Lee E. Williams Athletics and Assembly Center. The keynote speaker was Dr. Erick Green, superintendent of Jackson Public Schools.