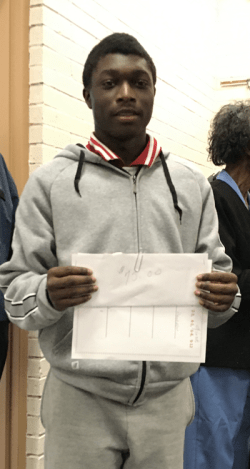 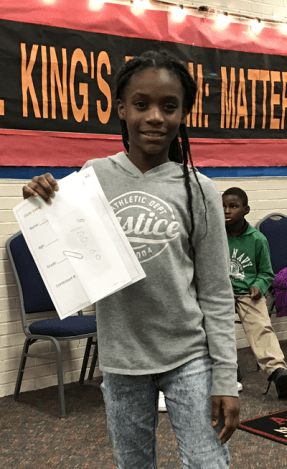 The Jackson Hinds Library System (JHLS) hosted several programs during the month of January in recognition of the Dr. Martin Luther King Jr. holiday. Such programs included essay contests, MLK coloring contests, viewing of films, reading of books and the reading of poetry about the life of King. These special programs were held at various branches including Eudora Welty, Lois A. Flagg, Willie Morris, Margaret Walker Alexander, Bolden Moore and Medgar Evers Library.

One of the libraries which hosted an essay contest was the Medgar Evers branch, located at 4215 Medgar Evers Blvd. The branch manager is Anne Sanders. Students in grades K-12 were eligible to participate in the essay contest. The theme was “Living Dr. King’s Dream: Matters in 2020!”

Preschoolers from various schools competed by presenting posters focusing on what  King stood and fought for.

Winners representing the preschools received joint cash prizes they could use for pizza parties.

The older students read their essays competitively before a panel of judges. They were judged on neatness, originality, clarity, content, grammar, punctuation, creativity and oral presentation.

The library was filled with well-wishers cheering and applauding as the winners were announced.

Peggy King, a long time Girl Scout troop leader, said she was there to cheer the preschoolers on but enjoyed all the participants.

Rev. Hosea Hines, pastor of Christ Tabernacle Church, said a word of prayer and later gave an inspiring message to the students. He told them that they can dream, should dream and it is important to dream.  He asked them to shout out, “I can dream” and together they yelled over and over again, getting louder each time, “I can dream.” Hines told the students, “you can daydream about who you want to be and what you want to become.”

Ethel Mangum, administrative assistant to Ward 3 Councilman Kenneth Stokes, told the students to grow up and be somebody. “Talk to adults you can trust and don’t let others lead you down the wrong road,” she said.

Bo Brown, District 70 House of Representative and former City councilman, congratulated the winners and told the students, “you need a short stick, not a long stick, in keeping the dream alive.”

Kim Corbett, deputy director of JHLS and Stokes gave remarks. Both congratulated the winners and encouraged them to be the best they could be. Stokes, who is very active with the city regarding MLK activities, announced that even though the MLK scheduled parade had been cancelled due to the forecast of bad weather, there would be a walk in celebration of Dr. King’s holiday. Stokes was instrumental in providing cash rewards to the essay winners and participants.