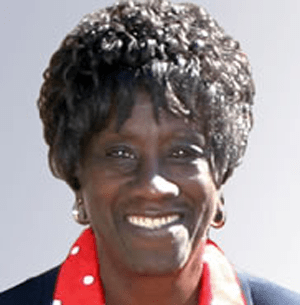 Unita Blackwell was a civil rights activist who rose from an early life as a sharecropper to become an advisor to seven presidents and the first black woman mayor in Mississippi. As a project director for the Student Nonviolent Coordinating Committee (SNCC), Blackwell led registration drives for black voters in Mississippi in the 1960s. She was jailed more than 70 times as she rallied voters and fought for their rights.

So important was her influence in the Civil Rights Movement that she became advisor to presidents Lyndon Johnson, Richard Nixon, Gerald Ford, Jimmy Carter, Ronald Reagan and Bill Clinton. In 1976, Blackwell became mayor of Mayersville, Mississippi, serving five terms. She died in Biloxi, Mississippi of complications of dementia at the age of 86.

Desegregating Mississippi: Blackwell was involved in one of the first desegregation lawsuits in Mississippi. In 1965, her son was one of hundreds of black students who were suspended for wearing SNCC pins to school. Blackwell and her husband filed suit, not only for the students’ right to wear the pins, but also for the desegregation of the school district in accordance with Brown v. Board of Education. The court found that the students didn’t have a right to wear the pins, but the schools did need to be desegregated. The case was appealed to the federal level, but the Blackwells won there as well – though it would take another five years until the local schools were finally desegregated.

Notable quote: “Politics is not just about voting one day every four years. Politics is the air we breathe, the food we eat and the road we walk on.”

What people said about her: “I am saddened by the passing of Unita Blackwell. She dedicated her life to fighting for civil rights in Mississippi. We are forever grateful for her work and sacrifice.” – U.S. Representative Bennie Thompson

“Our hearts are heavy today after hearing the news that former Mayersville Mayor Unita Blackwell has passed. We are a better state for her determination to make Mississippi a more just place. She remains a role model for generations of women who serve in city halls, county courthouses and the Mississippi Capitol. Godspeed, Mayor Blackwell. We salute you.” – Mississippi Democratic Party