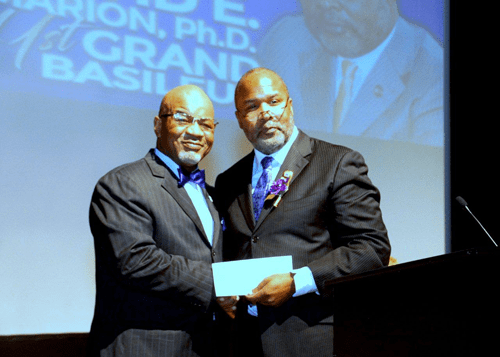 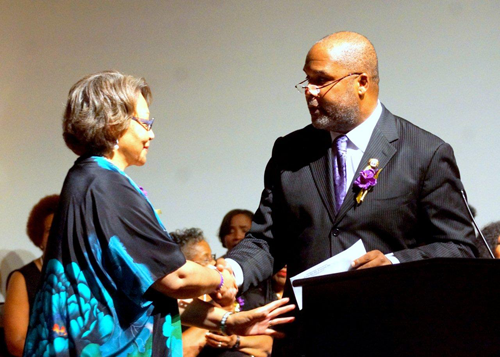 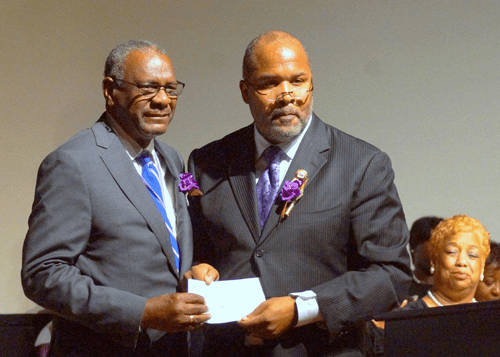 His deeds, his vision his mindset and his heart have made his name synonymous with service and leadership.

As the 21st Seventh District Representative, Marion successfully leveraged the tremendous platform of leading the largest district in Omega. During his tenure as district representative, chapters in the 7th District donated more than 1 million dollars in scholarships to college-bound high school seniors and fed more than 1600 families in Mississippi and Florida.

By utilizing the talents of the brotherhood, the 7th District developed the first online district-wide meeting registration, dues payment and MSP candidate fee submission portal in the history of Omega Psi Phi Fraternity, Inc. Other accomplishments include increasing district scholarships for undergraduate brothers to $80,000; creating the first “Healthy Ques” newsletter focusing on health matters for black men and their families; and overseeing 7th district membership with approximately 5,000 financial brothers in 147 chapters on the strength of reclamation efforts.

In July 2014, Marion was elected 1st Vice Grand Basileus of Omega Psi Phi during the grand conclave in Philadelphia. In this role, he was responsible for the formation and operation of all committees of Omega and the planning and execution of all national meetings of the fraternity.

History was made earlier this year when Marion, in grand style, was elected Grand Basileus of Omega Psi Phi in July at the grand conclave in New Orleans. The 7th District lead a mardi style parade as the largest district headed to the polls for a very decisive victory.

Marion has the distinct honor of being the first Mississippian to be elected to a national seat for the fraternity. Becoming Grand Basileus, raises that status to him being the only sitting national president of a greek organization living in the state of Mississippi.

Friday, August 24, Marion launched his programs and laid out his vision for the fraternity at the Jackson Convention Complex in Jackson, Miss. This program launch, attended by notable elected officials, college presidents, fraternity members from across the country and other members of the Divine 9 struck a cord of unity. All nine greek service organizations including regional directors, chapter presidents and others were there to welcome him as the new national leader and offer their support to enhance his programs.

Marion believes in leading by example.

It is one thing to say you have an HBCU Initiative; its one thing to say HBCUs need our help…its another thing to put your money where your mouth is. Marion’s first order of business during the program launch was to bestow $10K each to Jackson State University (where he received a bachelor’s degree in business administration), Tougaloo and Rust Colleges.

“Now more than ever, we must stand behind our universities not only with our words, but also with our deeds and our money,” Marion said to a standing room only crowd. “I’m committed to helping strengthen our HBCUs across the country.”

Marion highlighted several service oriented programs that he believes will re-position and strengthen the fraternity. “I’m committed to joining forces with other organizations and finding ways to utilize our leverage for the greater good,” he said. “Now is the time for service.”

Omega Psi Phi Fraternity will partner with the Uniformed Services University of Health Sciences and the Department of Defense in an obesity prevention initiative titled, “Well-Prepared.” This partnership places the fraternity on the front lines of helping to change the status quo in Mississippi and around the country.

Professionally, Marion is the owner of Marion Counseling Services, PLLC, a mental health clinic that specializes in providing individual, group, marital or couple and family counseling, psychological evaluations, psychiatric evaluations and employee assistance programs to organizations throughout the state of Mississippi. He has been in the counseling field since 1992 and in private practice since 1998. He holds a Ph.D. in counselor education with a minor in public administration and public policy from Mississippi State University, a master’s degree in rehabilitation counseling from Mississippi State University, and a bachelor’s degree in business administration from Jackson State University.

“Mental health is real and we are going to help eradicate the stigma of it and encourage our people to get help,” Marion said to a thunderous round of applause.

Marion is married to Joyce Cole-Marion, a licensed clinical psychologist and co-owner of Marion Counseling Services, PLLC. He has two children, Chelsea Marion, a physician in Atlanta and Chloe Marion, a ten-year-old boss of many.