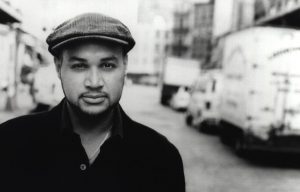 Rajendra Ramoon Maharaj is an Indo-Afro-Caribbean American artist, educator and activist. As a playwright, Maharaj has authored several plays, including Little Rock, winner of the 2015 Barrymore Award for Outstanding Ensemble in a Play.

He also wrote Daisy, inspired by the life and legacy of Daisy Lee Bates; and Hansberry/Baldwin. Rajendra’s other commissioned work includes Diss Diss and Dis Dat, a hip-hop musical, and Children of the Dream.

Recipient of the Woodie King Jr. Award for Outstanding Direction, four Vivian Robinson AUDELCO Awards for his direction and choreography, and the S.A.L.T. Award for Director of the year. Rajendra is an alumnus of Lincoln Center Directors Lab and TCG Young Leaders of Color in the American Theater.

Here, he talks about his latest offering, Little Rock, an Off-Broadway production he wrote and directed which is being staged at The Sheen Center for Thought & Culture located at 18 Bleecker St. in lower Manhattan. The play tells the riveting true story of the Little Rock Nine, the first black students to desegregate Little Rock Central High School.

The show is set to open Thursday, June 14th and to enjoy a limited run through September 8th. For more info, visit: www.sheencenter.org or www.littlerockplay.com.

Kam Williams: Hi Rajendra, thanks for the opportunity to interview you.

KW: What inspired you to track down each member of the Little Rock Nine?

RRM: I was really inspired by learning about their contributions to the Civil Rights Movement. And, the story continued to stay with me. As a documentary theatre-maker, I’ve always found that the actual testimonies of people who have lived through history from their own lips is most compelling.

KW: Were they shocked at the hostile reception they had received integrating Little Rock Central High School back in the Fifties?

RRM: Yes. Little Rock in 1957 was considered a moderate Southern city, when it came to race-relations. So, no one expected the unimaginable wave of racism, ignorance and hatred that these children, as well as their families, faced for the entire school year.

KW: How would you say their lives were shaped by serving as civil rights pioneers?

RRM: I think that The Little Rock Nine realized, as children, that, as American citizens, they were guaranteed certain unalienable rights. When Brown vs. Board of Ed. became the law of the land, they seized on the opportunity, not just for themselves but for generations yet unborn to have the opportunity of equality in public education across the nation. That’s what makes them both prophetic and courageous beyond their young age.

KW: Did any of them resent the fact that they had been exposed to so much hate at such a young age?

RRM: I think all of them felt the legacy of Jim Crow and segregation throughout their lives. But what set them apart was that they realized none of the actions that were directed at them mentally, physically or emotionally had anything to do with them. What the segregationists did was a reflection of themselves, and a sobering reminder of their humanity and deficiencies.

KW: Which one of their reflections surprised you the most?

RRM: I was really touched by all of their testimonies. However, I’m still deeply moved, daily, by the courage that 15 year-old Elizabeth Eckford showed the world when she walked to school by herself and faced a mob that wanted to lynch her. The dignity, grace, and fortitude that she showed the world continues to inspire me when I have to face my own mobs and critics when doing the right thing.

KW: Was there a thread that ran through all their narratives?

RRM: Yes, they were all incredibly courageous as well as determined to follow the law.

KW: When did you get the idea about writing a play about them?

RRM: I was directing a production at Arkansas Repertory Theatre. I had a day off and went to visit Little Rock Central High School. It changed the trajectory of my life. Here we are 13 years later, about to open the show Off-Broadway. It’s a dream come true as well as a full-circle moment, particularly because this is the 60th anniversary of the desegregation of Little Rock Central High School. Little Rock is a play that bears witness to the best and worst parts of our country and its legacy in regards to race relations. It is also a cautionary reminder, as we look at the current state of politics, to not turn the clock back. That is something that some forces in our country are trying to do.

KW: How did you decide what to include?

RRM: I knew that I wanted to focus on the school year and wanted all nine of them represented. Through readings, workshops and productions, I arrived at this current draft which focuses on the Crisis for the Nine between the 1957 and 1958 school year. The first act is the journey to get into the school. The second act focuses on the day to day struggles and triumphs that The Little Rock Nine and their families encountered as they fought to integrate Little Rock Central High School.

KW: What message do you want the audience to take away from the play?

RRM: I recently re-read “The Autobiography of Malcolm X.”

RRM: I remember sitting with my grandmother in her kitchen and her telling me fantastical tales and stories about our family and their journey from Haiti, Bahamas, India, and Trinidad to the United States of America.

KW: Was there a meaningful spiritual component to your childhood?

RRM: Yes, I grew up in a household that was very spiritual. My father was Hindu and my mother is a devout Roman Catholic. I carry those values both in my personal as well as artistic life.

KW: What is your favorite dish to cook?

RRM: A work in progress.

RRM: When I was pledging my fraternity, we had a scavenger hunt that included us running through an airport in costumes. That was pretty crazy.

RRM: That people would understand the power of words to do good or to do harm in the world.

KW: The Tavis Smiley question: How do you want to be remembered?

RRM: I’d like to be remembered as an artist, activist and citizen of the world who used the theater as an opportunity for conversation, discourse, unity and healing.

KW: Thanks again for the time, Rajendra, and best of luck with Little Rock.

RRM: Thank you, Kam. It was really wonderful to chat with you. Eyes on the prize!

Film Review by Kam Williams BFFs Play Cutthroat Version of Kids Game in Fact-Based Cat-and-Mouse Comedy As kids, five BFFs from Spokane, Washington began playing Tag with no idea that, over the intervening years, an […]

by Kam Williams Who Will Win, Who Deserves to Win, Who Was Snubbed 2018 was a banner year for black cast films, including BlacKkKlansman, Black Panther, Green Book and If Beale Street Could Talk. Might […]

Film Review by Kam Williams   Big Sky Adventure Features P.C. Variation on Classic Western Theme I suppose the good old days are gone forever when you could make a Western without worrying about being […]