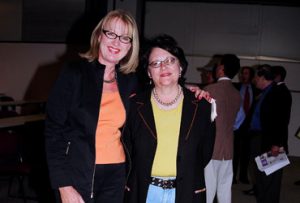 The “100 Years: One Woman’s Fight for Justice” Interview

Outraged by the injustice, she vowed to bring the story to the world. She spent the next two years researching and building relationships of trust with Native American leaders, and was eventually granted exclusive permission to crisscross the country with Elouise.

Filming of 100 Years: One Woman’s Fight for Justice began in Washington, D.C. and took place on tribal lands in many states. Melinda gained access to previously tight-lipped, high-level officials of the Department of the Interior, and to U.S. senators, congressmen, the judge presiding over the case and the lead attorney, and a number of Native American beneficiaries of the Indian Trust Fund.

In March of 2018, she was recognized by the PBS “Shatter the Lens” campaign celebrating women “in front of and behind the lens” in honor of Women’s History Month. Earlier this year, Melinda also received the Outstanding Achievement Humanitarian Award from the Indie Fest Film Awards.

Here, she talks about the making of 100 Years: One Woman’s Fight for Justice, NOW ON NETFLIX.

Kam Williams: Hi Melinda, thanks for the interview.

KW: How did you become aware of Elouise Cobell?

MJ: In 2002, I read a story in Mother Jones magazine about the broken Indian Trust and Elouise Cobell’s fight for justice.

KW: What inspired you to turn her story into a movie?

MJ: I was so outraged by the injustice that I vowed to bring her story to the world. I thought, if the United States government can treat a minority of people this way, then how safe are the rest of us?

KW: Her fight with the government lasted 30 years. How did you go about telling that story in less than two hours?

MJ: Very carefully. I realized that her story was long and dealt with a very complicated lawsuit. It was a huge challenge. At first, I set out to tell it as an advocacy piece. But I never imagined that Elouise would win. That was before I met her. After following her for many years and hearing her say,“the stars are aligned for justice for Indian people,” I just knew in my gut that she would overcome. So, as we were waiting for more funding, the story was unfolding, and it came to pass. In the end, we came full circle. It was a long 14-year wait, but it became a stronger story because of the wait. Also, I had an incredible team behind me to collaborate on such a complicated story, which took over 2 years in post-production.

KW: Was it hard balancing between the exploitation of Native-Americans and Elouise’s dedication to her people’s cause?

MJ: No, I always felt that this story was about contrast. It was about the power of big government versus the powerlessness of the people. And I was very lucky to have Elouise Cobell as my main character to drive the story. It was extremely hard seeing the exploitation of Native people, and there were many moments after filming when I had to step aside to pull myself together. That’s what I wanted the audience to feel, their pain and her resolve.

MJ: Because it’s not merely above the law… it IS the law! I don’t believe there was any treaty it really intended to keep.

KW: How was Elouise able to succeed in her class action lawsuit?

MJ: Pure grit and determination! She was tough as nails and would not back down. She came from a long line of very strong warriors in her family and was also motivated by what occurred at Ghost Ridge in the winter of 1894 when 600 Blackfeet Indians starved to death because of a shortage of government food rations. She was very much fighting for them.

KW: Native-Americans continue to languish on reservations where they lag behind virtually all other ethnic groups in terms of education, income and housing. What do you see as the solution for their plight?

MJ: I feel very strongly that, if the United States government adequately provided for housing, education and healthcare as promised through the treaties, they would be much better off. But because they have to fight for everything they get, it perpetuates a vicious cycle of grinding poverty. There’s a joke in Indian country that if you’re going to get sick or need an operation, you better do it before June, because the funds will run out after that. Not too funny to me, but the Native people are resilient and laugh more than any people I know.

KW: What message do you want people to take away from 100 Years?

MJ: I want people to be inspired by Elouise Cobell’s story. If an indigenous woman from a poverty-stricken tribe can face down the most powerful government in the world and win, then there are no excuses for any of us. Her story is about the power of one.

KW: This was your first feature-length film. Are you already working on another?

MJ: I am in the research stages of another crisis in Indian country, namely, all the missing and murdered Native women.

MJ: “Yellow Dirt.” It is the tragic story about how uranium mining poisoned the lands of the Navajo.

MJ: My earliest childhood memories are of playing with my cousins and visiting with my grandparents in Ohio. And the trauma of being pulled out of my first grade class to say goodbye to my teacher, cousins and grandparents because my family was moving to Miami, Florida, where we had no family.

KW: I’m sorry you went through that. Was there a meaningful spiritual component to your childhood?

MJ: Yes I come from what I call “generational faith,” 9 generations of Christians who believe in the Father, the Son and the Holy Spirit.

KW: Amen, sister! What is your favorite dish to cook?

KW: Sherry Gillam would like to know what is the most important life lesson you’ve learned so far?

MJ: That everything that has happened to me in life, good or bad, has made me who I am today. I should celebrate them all.

MJ: Expose the U. S. government.

MJ: For there to be no more suffering in the world.

MJ: Yes. What made you think you could take on such a big story having never done a feature-length documentary? I felt it was my calling. Just as it was Elouise’s calling to file the lawsuit, and Judge Lamberth’s calling to preside over it, it was my calling to expose it through the power of film. I knew that if I had God on my side I could do anything!

MJ: Not much… I’m an independent doc filmmaker. [Laughs]

KW: Thanks again for the time, Melinda, and best of luck with all your endeavors.

MJ: Thank you, Kam for recognizing the importance of 100 Years: One Woman’s Fight for Justice.

To learn more about 100 Years: One Woman’s Fight for Justice, visit: https://www.100yearsthemovie.com/

Sicario: Day of the Soldado

Film Review by Kam Williams   Feds Fight Bad Hombres in Gory Border War Sequel I can’t think of a movie that has ever been more timely. Just as the debate about the detention of […]