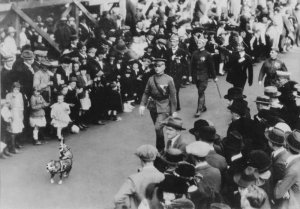 Ads for Sgt. Stubby: An American Hero bill the film as “The Incredible True Story of America’s Top Underdog.” Yet, the movie itself features this contrary disclaimer, albeit at the end and in small print: “Although based on historical events, all characters appearing in this work are fictitious. Any resemblance to real persons is purely coincidental.”

I suppose that in this age of fake news it was just a matter of time before we’d be wrestling with whether or not a picture passing itself off as factual might actually be phony. What’s weird about this animated adventure is how it goes out of its way during the closing credits to authenticate the tall tale via archival photos of the decorated pooch and the soldier who purportedly adopted him.

The faux World War I memoir, narrated by Margaret Conroy (Helena Bonham Carter), unfolds in New Haven, Connecticut in 1917 which is where we find her brother Robert (Logan Lerman) enlisting in the Army out of a sense of patriotic duty. During basic training, the young buck private starts feeding a mangy stray that looks like a mix of Bulldog and Boston Terrier.

When it’s time for the soldiers to ship out, Robert bids his pet adieu, but the industrious canine somehow stows away aboard the vessel headed overseas. When discovered, Stubby is lucky that Colonel Ty (Jim Pharr) makes him the brigade’s mascot and issues him a set of dog tags.

Upon landing in France, the doughboys are immediately dispatched to the Western Front. While stuck in the trenches, Robert and Stubby are befriended by a grizzled French vet (Gerard Depardieu) who shares his survival tips and some home-cooked cuisine.

Then, when the Germans attack, Stubby exhibits extreme valor, between fighting the enemy and saving wounded soldiers. We only have a blow-by-blow of all of the above because Robert reportedly was a prolific writer whose sister Margaret presumably preserved all his letters home for posterity.

And now, thanks to director Richard Lanni, the decorated pooch’s battlefield exploits have been belatedly adapted to the big screen. Honestly, it’s hard for this critic to know what to make of this movie.

Is it merely an innocent, inspirational buddy flick or is it an Army recruiting tool targeting innocent tykes? Who knows? regardless, this supposedly ‘true story’ is the cinematic equivalent of not just fake news, but very fake news.

To see a trailer for Sgt. Stubby: An American Hero, visit: https://www.youtube.com/watch?v=gv_vO182_kA