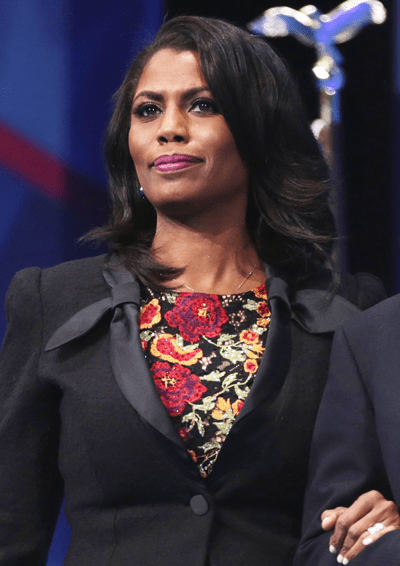 The White House said Wednesday that Omarosa Manigault Newman, a former “The Apprentice” contestant turned political neophyte, is leaving the administration next month.

Newman’s departure was rumored back in September following a number of controversies.

A month earlier, the 43-year-old endured a chaotic trip to the National Association of Black Journalists Convention in New Orleans.

Her appearance at an event during the convention was described as confrontational and hectic as she aggressively insisted reporters “Ask me a question about me,” while sidestepping inquiries about the administration.

The unannounced April visit to the White House in her bridal attire caught fellow senior aides and some security officials by surprise.

She married Pastor John Allen Newman later that month in a small ceremony at the post office-turned-hotel blocks from the White House and owned by her boss.

Sources told the Daily News in September that White House chief of staff John Kelly was unhappy with Newman’s oversized influence on the president and her ability to get him worked up over hot topics.

Newman had to be escorted from the building after Kelly told her she was out, Ryan said.

One of Kelly’s priorities since taking over for Reince Priebus has been to strictly control who gets to see the president and how Trump gets information.

Newman, commonly referred to as just Omarosa, appeared on the 2004 season of the president’s reality show and earned a reputation as a ruthless competitor.

She was “fired” by Trump during the run, but reappeared years later on Trump’s “Celebrity Apprentice.”

She starred on other reality shows and stayed close to Trump.

Newman, who previously worked for Vice President Al Gore during the Clinton era, joined Trump’s campaign early on and served as his director of African-American outreach.

She later joined the administration as director of communications for the White House Office of Public Liaison, working on outreach to various constituency group.

But there were many unanswered questions about her role in the administration and what she did on a day-to-day basis remained unclear. Newman earned $179,700 a year and worked in the Eisenhower office building near the White House.

“We wish her the best in future endeavors and are grateful for her service,” Sanders said in a statement.

Newman’s exit comes after a tumultuous first year for the Trump administration. Each month saw a number of high profile departures.