MELBOURNE, Australia (AP) — Serena Williams held up a Grand Slam winner’s trophy for the 23rd time, celebrating her unrivalled place in history, and received a congratulatory letter and a pair of custom-made shoes from Michael Jordan, the name most synonymous with No. 23.

Venus Williams got to watch from close range again, and shed tears more of joy than regret after being beaten in a major final for the seventh time by her record-breaking younger sister.

Serena won the all-Williams final, the ninth in Grand Slam history and the second in Australia, 6-4, 6-4 on Saturday night.

With her record seventh Australian Open title, Serena moved ahead of Steffi Graf for the most major titles in the Open era.

The Williams sisters are close. They started out playing together in Compton, California, hardly a hotbed for tennis, with their father Richard and mother Oracene as coach and mentor. And they still practice and travel together around the world.

They met for the first time at a major at Melbourne Park in 1998 — Venus won that one. In 2003, when the younger of the Williams siblings completed her “Serena Slam” of four consecutive titles, Venus was on the other side of the net. She didn’t reach another Australian final for 14 years.

When Serena sat on the court, holding both arms up to celebrate on Saturday, Venus walked over to her sister’s side of the net for a hug.

“This was a tough one,” Serena said. “I really would like to take this moment to congratulate Venus, she’s an amazing person — she’s my inspiration.

Asked if it felt awkward to be on the receiving end of so many losses to her sister, the 36-year-old Venus didn’t flinch.

“No, because I guess I’ve been here before,” she said. “I really enjoy seeing the name Williams on the trophy. This is a beautiful thing.”

Venus won the last of her seven majors in 2008 at Wimbledon. She didn’t make the second week of a major for a few years as she came to terms with an energy-sapping illness after being diagnosed with Sjogren’s syndrome in 2011. And she only made it back to the semifinals last year at Wimbledon.

Another shot at a first Australian Open title was a sign of progress, she said.

“That’s exactly where I want to be standing during these Grand Slams, is on finals day, having an opportunity,” she said. “That’s the highlight of all this, is to be in that moment.”

Serena Williams, meanwhile, enjoyed the fact she made history in Melbourne. Only Margaret Court, with 24, is in front of her in terms of overall Grand Slam singles titles, although the Australian great won 13 of her Grand Slams before the Open era began in 1968.

“My first Grand Slam started here, and getting to 23 here, but playing Venus, it’s stuff that legends are made of,” Serena said. “I couldn’t have written a better story.”

The match didn’t live up to its classic billing, with nerves and tension causing uncharacteristic mistakes and unforced errors, with four consecutive service breaks before Venus finally held for a 3-2 lead in the first set. That included a game when Serena had game point but served back-to-back double-faults and three in all to give up the break.

There were six service breaks in total. Both players were relatively subdued, except when Serena smashed her racket in the third game.

After the fourth game, however, Serena Williams didn’t face another break point in the 1-hour, 22-minute match.

“Serena Williams, that’s my little sister,” Venus said. “I have been right there with you. Some of them I have lost right there against you. It’s been an awesome thing, your win has always been my win.”

In terms of total years, it was the oldest Grand Slam women’s final in the Open era —the Williams sisters combining for 71 years, 11 months.

Roger Federer will be aiming to increase his all-time men’s record to 18 when he takes on 14-time major winner Rafael Nadal on Sunday, completing the singles finals lineup of all 30-somethings.

Bob and Mike Bryan missed out on a doubles record, losing the final 7-5, 7-5 to Henri Kontinen of Finland and John Peers of Australia.

The third-seeded twins were trying to win their 17th Grand Slam title, which would have tied them with John Newcombe.

Speaking of records, Serena got a little bit superstitious Down Under, and hadn’t wanted to talk about the No. 23 until she got it.

Now there’s a limited-edition racket — 23 of them to be released — and some custom-made shoes sent by former NBA great Jordan. It had Jordan’s usual jersey number No. 23 stamped on the heel, helping to provide some synchronicity for the numbers involved. 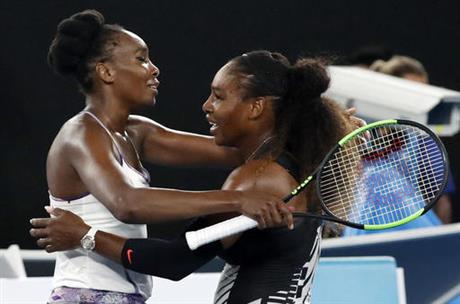 Venus Williams, Federer through to semifinals in Australia

By JOHN PYE MELBOURNE, Australia (AP) — It was a long time coming for Venus Williams, who reached her 21st Grand Slam semifinal but her first at the Australian Open in 14 years. CoCo Vandeweghe […]

Worth a mention: Williams aiming for record 23rd major title

By JOHN PYE MELBOURNE, Australia (AP) — Serena Williams definitely doesn’t want to talk about the No. 23. She doesn’t really want to think about planning a wedding, either, while she’s pursuing a Grand Slam […]

(AP) Serena Williams spent a good portion of 2015 deflecting questions about whether she could complete the Grand Slam. After coming oh-so-close, she can acknowledge how much she cared about the rare feat. “I wanted […]