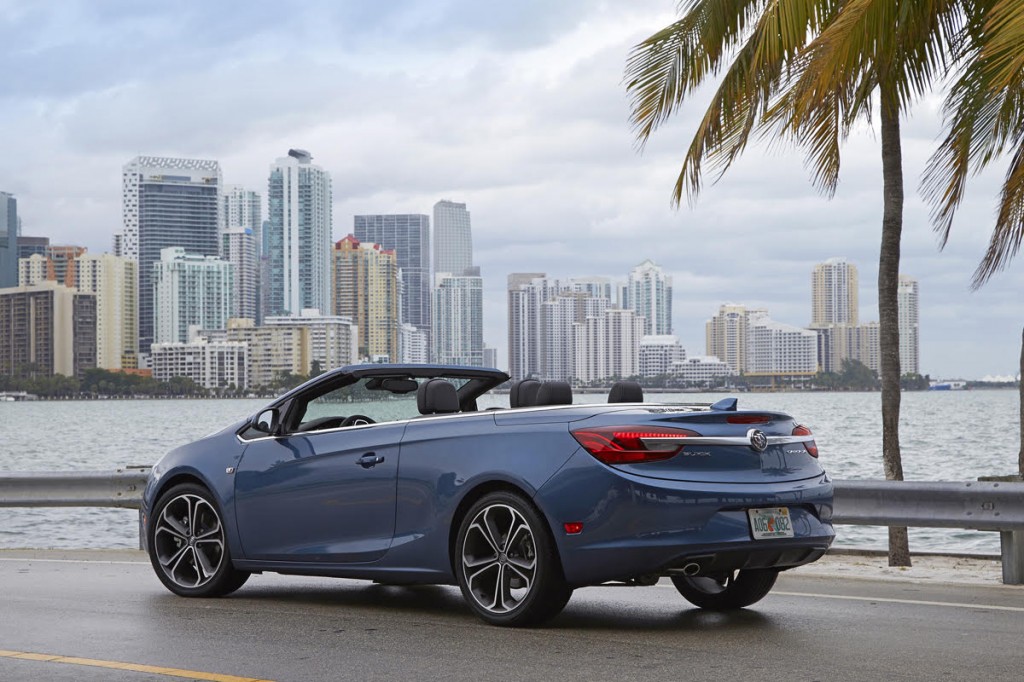 DETROIT – ‘Yep, that’s a Buick,” was said more than once during our week-long test-drive of the Cascada. That’s because it is a very stylish car and more important the Cascada is a 2+2 convertible.

The 2016 Buick Cascada is the first ragtop in the brand’s lineup in 25 years. And no, the Cascada is not a hardtop convertible; it is a fully automatic soft top that will open in a rather swift 17 seconds at up to 31 mph, just in case you get caught on the road in unexpected rain.

This top had both thermal and acoustic insulations. For a convertible, the Cascada was relatively quiet and solidly built. There wasn’t any noticeable noise, vibration and harshness and it was truly a global car that was built in Gliwice, Poland.

This car had some pep but it was just a smidgen shy of being quick. That’s probably because it had a 1.6-liter turbocharged variable valve timed four-cylinder engine with direct injection. This combo made 200 horsepower and 207 pound-feet of torque from 1,800 to 4,500 rpm. That’s where the pep came in.

The engine was mated to a six-speed automatic transmission that shifted quietly and smoothly. Two-hundred horsepower is enough to make any car, short of a full-size sedan, quick but the Cascada was peppy.

We learned many years ago that a traditional convertible, that’s a ragtop, is heavier because of the grade of steel used in the bodies to offset the fact that it doesn’t have a hardtop. We don’t know if that is still the case but the Cascada was just 21lbs. shy of weighing two-tons.

We thought it was a little thirsty for a four cylinder engine and that might have been because that engine had to power almost 4,000 lbs. of metal. The Buick Cascada had an EPA rating of 20 mpg in the city, 27 mpg on the highway and 23 mpg combined. But that engine did move the car smartly.

The only other quibble we had in terms of mileage was that we did get into the reserve tank of fuel but there was no warning or alert light that we saw telling us that we were low on fuel.

Still, the Buick Cascada was a slick looking car. It had flowing lines and swept back A-pillars. When folded, the top fit completely beneath the hard tonneau cover behind the rear seats which gave the car a more fluid profile.

Designed from the outset as a convertible, the Buick Cascada had sweeping body sidelines and sleek headlamps that flowed into the front fenders. There were Buick’s wing-shaped LED daytime running lights.

Chrome trim bridged between the wing-shaped taillights, which were also LED-lit. The deck lid opened rearward to accommodate the folding soft top. The Cascada had 13.5 cu. ft. of storage space with the top up and 9.8 cu. ft. with the top down.

Inside, there were heated front seats and a heated steering wheel. The Cascada had authentic French stitching, a soft touch dash and soothing red ambient lighting. All of the controls were in a sort of U-shaped control area just under the infotainment screen.

It was a 2+2 so getting anybody bigger than a child in the rear seats was not going to be pleasant. However, the rear seat backs could be folded forward to create a flat surface to store some stuff, say for a picnic. And it did have pyrotechnically activated rollover bars linked to the air bag system. There were also 20-inch aluminum alloy wheels.

The front-wheel-drive Cascada really remained level during sharp turn or sweeping curves and it had a comfortable ride. It employed what Buick called a HiPer Strut front suspension that enhanced ride and handling by reducing torque steer and inducing more linear steering through better camber control and improved reaction to bumps and rough surfaces.

In the rear, was a Watts Z-link suspension that helped to center the axle during cornering which kept the car’s handling responses symmetrical on both left- and right-hand turns. The set-up required less space and that enabled engineers to give the Cascada more cargo space.

Buick had full access to the equipment bin and the 2016 Cascada was loaded. Of course, it had a WiFi hot spot, a remote starter, dual zone climate controls, front and rear 12 volt outlets. The Buick IntelliLink with a seven-inch color touch screen that featured text message alerts, Siri eyes Free for Apple phones and an iO6 or newer operating system and navigation.

By Frank S. Washington Special to The Mississippi Link DETROIT – Honda used its global network to re-establish the Civic as one of the best small cars in the world. And depending on what you […]