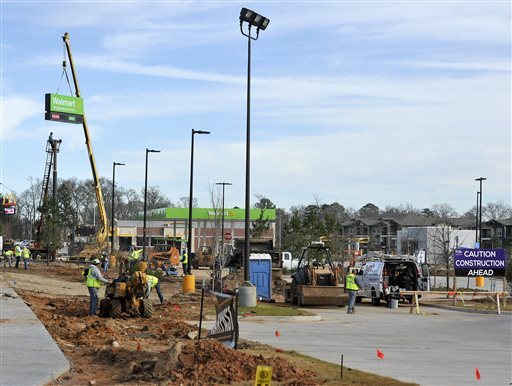 One crew finishes up landscaping as a second crew installs the primary sign on top of a pole, Friday, Jan. 15, 2016, at a new Wal-Mart Neighborhood Market location slated to open soon in Tyler, Texas. Even as the Bentonville, Ark., based company plans to open three stores in Tyler, the company announced Friday the planned closure of 269 stores, more than half of them in the U.S. and another big chunk in its challenging Brazilian market. (Andrew D. Brosig/Tyler Morning Telegraph)

JACKSON, Mississippi (AP) — Six Walmart stores in Mississippi are closing as part of the company’s plan to shutter 269 stores worldwide.

More than 100 of the closures will affect the smallest format stores, Walmart Express, which has been in the pilot stage since 2011. The Mississippi stores affected are in Belmont, Mantachie, Sardis, Walnut, Dermas and Nettleton.

They will be closed to the public beginning Jan. 28.