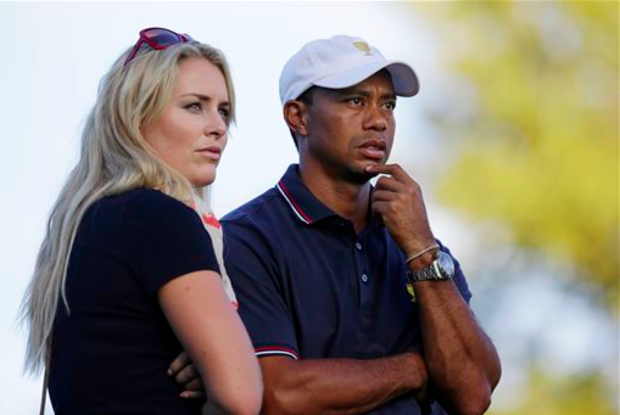 This Oct. 3, 2013 file photo shows Tiger Woods watching with his girlfriend Lindsey Vonn at the Presidents Cup golf tournament at Muirfield Village Golf Club in Dublin, Ohio. Vonn announced on Sunday, May 3, 2015, that she and Woods have decided to end their three-year relationship. (AP)

PONTE VEDRA BEACH, Fla.  (AP)— Tiger Woods says he hasn’t been sleeping well because of what he calls a tough three days — his split with Lindsey Vonn and the anniversary of his father’s death.

Woods and the Olympic ski champion announced on Sunday they decided to end their relationship because of their hectic travel schedules. That was nine years to day that Woods’ father, Earl, died.

Woods says this three-day window through Tuesday — the anniversary of his father’s memorial service — is “brutal” on him. And he said the split with Vonn only adds to it.

He says he was rusty and tired playing a nine-hole practice round at The Players Championship.

Woods won the last time he was at the TPC Sawgrass in 2013. He missed last year while recovering from back surgery.