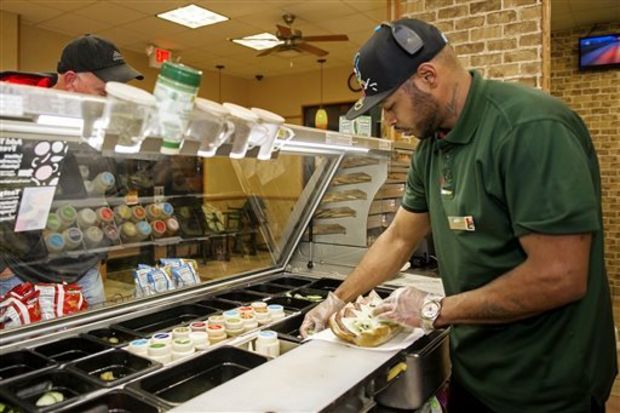 In a Wednesday, Dec. 17, 2014 photo, Michael Ellington makes a sandwich for a customer, at Subway near the Lincoln Airport in Lincoln, Neb. Ellington, an inmate at the Community Corrections Center of Lincoln who served nearly seven years for robbery, is nearing parole at the end of the year. He says he is grateful for his time at the Community Corrections Center in Lincoln. (AP Photo/The Journal-Star, Kristin Streff)

LINCOLN, Nebraska (AP) — Nebraska inmate Michel Ellington, who committed two robberies and has a parole hearing later this week, says he is grateful for his time at the Community Corrections Center in Lincoln.

“If I never would have come here, I never would’ve made it to this point,” Ellington said. “It’s a blessing to be here.” 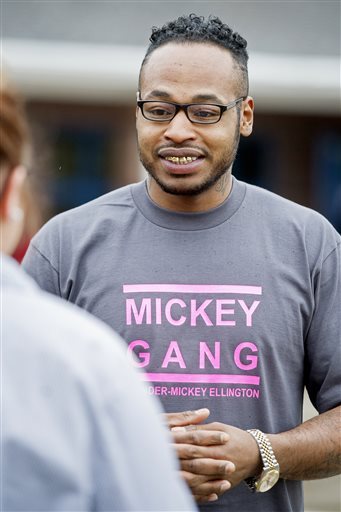 The 32-year-old from Clarksdale, Mississippi, was imprisoned for two robberies he committed in June 2007. He had a job at Lincoln Plating back then and was nearing a nursing license, but he wanted the fast life and quick money.

“I didn’t want to be responsible or work hard,” he said.

Now he has two work-release jobs — calluses on his hands from one of them — and talks about taking positive steps after a year at the corrections center. He told the Lincoln Journal Star that the center has helped prepare him for being outside prison and that he’s older now and wiser than on the night he and a friend robbed three people in two separate crimes. Ellington was sentenced to 14 to 28 years behind bars.

Early on at the Tecumseh prison in southeast Nebraska, Ellington said, he created a re-entry plan and took all the classes he could: parenting, anger management, Alcoholics Anonymous, money management, computer literacy and job skills.

Prison was his wake-up call.

“It was like a puzzle. Putting the pieces together, just day by day,” Ellington said.

He wants to apologize to his robbery victims and he wants to start a nonprofit called the Mickey Gang, a support system for people who want to better their community “by combating poverty, violence and oppression through love, care and respect.”