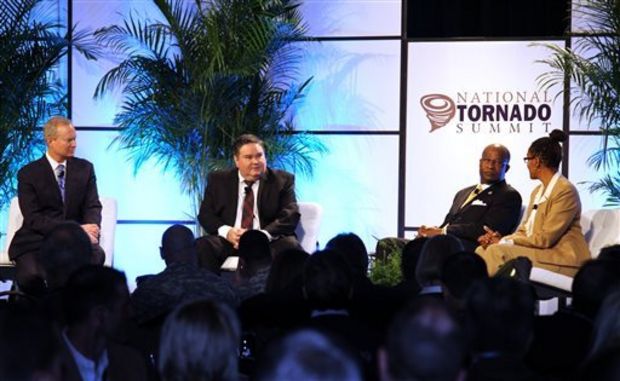 In this photo provided by the Oklahoma Insurance Department, from left, Oklahoma City Mayor Mick Cornett, Moore, Okla. Mayor Glenn Lewis, Hattiesburg, Miss Mayor Johnny DuPree and Joplin, Mo Mayor Melodee Colbert-Kean participate in a panel discussion during the National Tornado Summit in Oklahoma City on Monday, Feb. 10, 2014. About 85 percent of residents who were displaced by the large and deadly tornadoes that decimated Joplin and Moore, have rebuilt or intend to, the communities’ mayors said.(AP Photo/Courtesy of Oklahoma Insurance Department)

OKLAHOMA CITY (AP) — About 85 percent of residents who were displaced by the large and deadly tornadoes that decimated Joplin, Mo., and Moore, Okla., have rebuilt or intend to, the communities’ mayors said Monday.

It’s been almost three years since the town of Joplin saw an EF5 tornado with winds topping 200 mph. The May 2011 storm killed 161 people, destroyed nearly 7,000 homes and caused $2.8 billion worth of damage — the costliest twister in U.S. history.

Joplin Mayor Melodee Colbert-Kean said during the opening panel discussion at the National Tornado Summit that things are slowly returning to normal, but the recovery process will take years.

Of the approximately 550 businesses destroyed in the storm, about 500 business owners have rebuilt, the mayor said.

Colbert-Kean and Moore Mayor Glenn Lewis — whose town was hit by an EF5 tornado on May 20, 2013, that killed 25 people and destroyed 1,100 homes — said that once recovery efforts start, financial devastation can soon take hold if a community is not well-prepared.

“You basically go broke before you get any money back,” Lewis said Monday, noting that federal funding is based on reimbursement. He said about 85 percent of Moore’s affected residents have rebuilt or plan to do so, adding that many of the homes destroyed were older and residents didn’t realize how much it would cost to rebuild.

Finance directors need to be on the top of their game, Colbert-Kean said.

“You can be devastated if you do not have enough funds,” she said, “because you are putting out that money first.”

The federal government covered 90 percent of cleanup following the tornado in Joplin, while the state of Missouri picked up the rest, Colbert-Kean said.

In Hattiesburg, Miss., where nearly 200 homes were destroyed by an EF4 tornado one year ago, most of those displaced were in rented homes, and the owners of the homes took the insurance money and didn’t rebuild, Mayor Johnny DuPree said. Officials took extra steps to check on residents’ well-being and find out where they were living following the storm and what help they needed.

And waiting until a disaster strikes is not the time to develop relationships with people from other agencies, said Oklahoma City Mayor Mick Cornett, who moderated the panel.

“I’ve never heard of someone establishing a significant turf issue in the wake of a tornado, but you don’t want to be the first city where something like that occurs,” Cornett said, adding that disasters are not the time to worry about city, county and state lines.

The summit, now in its third year, brings together scientists, insurance adjustors, vendors and assorted weather watchers. It continues Tuesday.