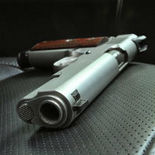 JACKSON, Mississippi (AP) — The Mississippi Department of Public Safety on Monday dropped the $6 photo fee it tacked onto the charge for a concealed-carry gun permit starting July 1, and it’s working to refund the money to anyone who has already paid it, spokesman Warren Strain said.

The attorney general’s opinion says DPS may not charge any more for a concealed-carry gun permit, including the $6 photo fee.

Strain said the $6 photo fee was added at the beginning of the state budget year because a private vendor was charging the department that amount for each gun permit. DPS either had to absorb the cost or pass it on to consumers, he said.

A private company, MorphoTrust, owns and maintains the equipment DPS uses to make the gun permits, driver’s licenses and other cards, and it charges DPS a fee for each card, Strain said.

The $6 photo fee remains in place on driver’s licenses and other cards DPS issues, such as permits for security guards, Strain said.

Legislative leaders scolded Public Safety Commissioner Albert Santa Cruz and other DPS executives during a Sept. 18 budget hearing, telling them that law-abiding citizens shouldn’t have to pay higher fees for gun permits. Santa Cruz said at the time that he would check to make sure DPS was following state laws.

The commissioner on Oct. 3 requested a legal opinion from the attorney general’s office. Although such opinions are nonbinding, they provide guidance to agency leaders and elected officials. State Rep. Joe Warren, D-Mount Olive, also requested an opinion.

Concealed-carry permits are exempt from public records, and it was not immediately clear how many have been issued this budget year. Strain said DPS was working to gather that information

“The commissioner’s action clearly violates state law, demonstrates a lack of leadership and makes it appear he wants to be in the gun control business,” Reeves said. “Mississippians are tired of government reaching deeper into their pockets to justify agency overspending.”

In a statement issued through Strain, Santa Cruz responded that DPS works hard to quickly issue gun permits and “political posturing is misguided.”

A Mississippi state trooper remains on administrative leave after being arrested on statutory rape charges. Otis Taylor, a trooper based in the Mississippi Highway Patrol’s Brookhaven substation, was arrested Dec. 31 in Franklin County

Warren Strain, spokesman for the highway patrol, said Taylor is on leave without pay pending the outcome of the investigation.

Taylor has worked for the highway patrol since November 2007. […]

LEXINGTON, Mississippi — A man who abducted his 6-year-old son from a Holmes County home has surrendered to authorities.

A Brandon Middle School teacher is on suspension after what school district officials are referring to as a “disciplinary issue.”

Angela Smith told The Clarion-Ledger her eighth grade son was shoved on March 19 by information and communication technology teacher Terry Williams after he was caught tossing a piece of candy across the room.