“District 28 is all Jackson” 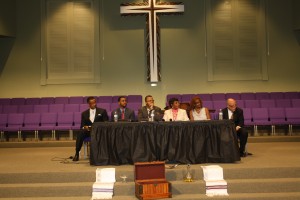 Candidate Marshand Crisler said, “District 28 is all Jackson,” as he and the other five candidates out of nine who came to meet the public and be questioned on their positions on many topics Tuesday, Jan. 22, at New Horizon Church International.

Moderator was June Hardwick of New Horizon. The questions ranged from how the capital city of Jackson is funded (or the lack thereof) from the state to charter schools and the attempts to close the only abortion clinic in the state of Mississippi. There were the issues of housing, welfare and child care.

As all six present candidates stated their objection to advancing charter schools in the state, Robin Jackson of Jackson State University and it is “Miss Freshman” asked, “If charter schools are so wrong, then how do we make public schools better?”

As time restraints did not allow for all the questions to be posed, at the close of the forum Hardwick gave homework assignments to the citizens in attendance:  research how do we increase minority participation in state contracts; how do we make these candidates accountable once one is elected; track their legislative voting records; what about our seniors and veterans; how are our representatives affected by lobbyists who are sometimes coercive; join an organization – there is power in numbers.

With 100 percent of the precincts reporting, two of the nine candidates in the race for the Senate District 28 seat will be returning to the polls on Tuesday, Feb. 26, 2013, in a run-off election to declare a winner for the position left vacant by the death of Senator Alice Harden.

Unofficial results show that Marshand Crisler edged out opponents, Sollie B. Norwood and Tamara Grace Butler, by a close margin to lead the trio in the special election poll results Feb. 5, 2013…. […]

Nine candidates are running for a state Senate seat in part of Hinds County. They’re competing to succeed Democrat Alice Harden, who died in December.

From nine to two…

Vying to fill the unexpired term of the late Senator Alice Harden, Marshand Crisler and Sollie Norwood faced off at New Horizon Church International Monday, Feb 18, to a small crowd of supporters and interested voters.

With three years left on a four-year term, nearly 60,000 voters in portions of West and South Jackson will decide who will represent District 28 when they go back to the polls Tuesday, Feb. 26, for a runoff election…. […]