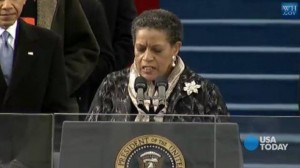 Mississippi’s own Myrlie Evers-Williams, 79, widow of slain Mississippi civil rights leader Medgar Evers was the first woman and first layperson to give the invocation at a presidential inauguration. She did so on Monday, Jan. 21, 2013 at the request of President Obama’s inauguration planning committee.

Evers-Williams, as an African American, also called upon those unique historical references that her experiences would engender – this marking the 150 years since the Emancipation Proclamation and 50 years since Dr. Martin Luther King Jr.’s March on Washington.

“One hundred and fifty years after the Emancipation Proclamation and 50 years after the March on Washington, we celebrate the spirit of our ancestors, which has allowed us to move from a nation of unborn hopes and a history of disenfranchised votes to today’s expression of a more perfect union.”

“We are here to ask for blessings…, blessings upon all of us,” said Evers-Williams. “We celebrate the spirit of our ancestors.” She continued, “You gave us the spirit, supplying Your Grace. We now stand beneath the shadow of the nation’s capital – golden dome reflects the unity and democracy of one nation.”

She paid tribute to those laid to rest in Arlington cemetery approximately four miles away, who fought and died for their country. Her husband, Medgar is buried at Arlngton National Cemetery. He served in the Navy and has a ship also named in his honor.

Evers was gunned down in his driveway in June 1963; he led boycotts of white businesses that discriminated against blacks and fought to desegregate the University of Mississippi.