Suspect shot girlfriend and put her in the freezer

A Jayess man has been convicted of murder in the 2010 death of his live-in girlfriend who was found shot and stuffed in a freezer at the couple’s home.

Robert Wayne Silvia was charged in the death of 52-year-old Darlene Berthelot. 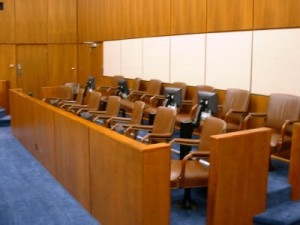 Silvia was convicted in Walthall County. He was found guilty by a jury and sentenced to life in prison.

Prosecutors say deputies found Berthelot’s body in the freezer on June 10, 2010, after responding to a call from her daughter, who lives in Washington Parish, La., asking them to check on her.

Walthall County Coroner Shannon Hartzog says Berthelot had been dead about four or five days before the body was found.

Captain Robbie Linley of the Clarksdale Police Department said a 14-year-old boy has been charged with attempted armed robbery after pulling a gun on a 66-year-old woman.

Linley said the alleged assault occurred on Nov. 10 at 1:11 in the afternoon. He said the suspect approached the woman in the 500 block of Sunflower Avenue and attempted to take cash from her.

Linley said the teen was unsuccessful and fled the scene on foot.

The victim was not injured.

The Mississippi Highway Patrol says a Tennessee man was killed in a crash at the intersection of Highway 145 at Highway 45 in Booneville.

Trooper Ray Hall tells the Northeast Mississippi Daily Journal that 61-year-old Dock Davis Jr., of Grand Junction, Tenn., was killed in the crash. Hall said Davis was driving north on Hwy. 145 in an SUV when he crashed into an embankment after crossing Hwy. 45.

Hall said Davis was not wearing a seat belt and pronounced dead at the scene.

Three passengers in Davis’ vehicle were injured and taken to a local hospital.

Mississippi casinos stumbled through their worst revenue month since September 1998 in October, with gamblers losing 8 percent less than in October 2011.

Statewide casino revenue fell to $167.4 million, according to Mississippi Department of Revenue figures.

If poor results continue, the state’s gambling halls could collect less money in 2012 than in 2011, even though the prior year saw Mississippi River casinos closed for much of May because of flooding.

The numbers exclude Choctaw Indian casinos, which aren’t required to report winnings to the state.