Patricia Smith of Jackson juggled a full life as a wife, mother and talented cook. Last August, after living with the pain of endometriosis nearly half her life, Smith decided she had had enough.

“I lead a busy life, which didn’t leave a lot of time to stop and do anything constructive about the pain I was experiencing every month,” said Smith. “I was really sick and tired of being in pain, but I’d begun to think it was something I’d just have to live with.”

When she was diagnosed with endometriosis several years ago, Smith said she had been experiencing severe pelvic pain for the past few years. She didn’t pursue a surgical solution because she didn’t want to face the prospect of undergoing a traditional hysterectomy and the accompanying scar, pain and downtime. 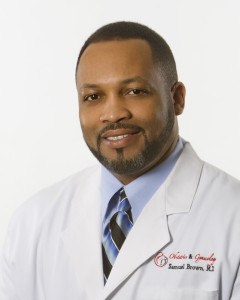 But after the pain became more than she could handle, she was ready to consider her options. She went to see Dr. Samuel Brown, an OB/GYN with Central Mississippi OB-GYN Associates after hearing he was able to perform gynecologic surgeries using a less-invasive technique. A pelvic ultrasound suggested endometriosis. Brown informed Smith that hysterectomy, or surgical removal of the uterus, was one of her options. In fact, after educating her on the procedure, Brown explained she was actually an excellent candidate for a robotic-assisted hysterectomy with the da Vinci® Surgical System at nearby Central Mississippi Medical Center.

The da Vinci system is an alternative to both traditional open surgery and conventional laparoscopy. It enables surgeons to guide a robot’s arms to perform complex and delicate procedures through very small incisions with incredible precision.

“When Dr. Brown demonstrated how different this type of surgery was in comparison to the other type that required a large incision, extended hospital stay and long recovery, it was an easy decision to make,” said Smith. “When he first told me about robotic surgery, I wasn’t too surprised because I knew Central Mississippi Medical Center keeps up with new technologies. When I learned Dr. Brown had performed over 400 robotic surgeries, I was more than ready for the surgery.”

Brown performed a robotic-assisted hysterectomy at CMMC and the procedure went well. In just two weeks she was feeling like a new woman, Smith says.

Comparing notes with several friends who had traditional hysterectomies, Smith discovered she had much less pain and scarring in addition to a much quicker recovery.

Thanks to her successful surgery, she enjoyed the rest of the summer with her family after quickly returning to her normal day-to-day routine. She calls her surgery and care by Brown, “a miracle in that I never expected to be treated so well or be transformed so quickly from a life of pain to a pain-free life.”

Brown, who has trained surgeons around the state and beyond, including Indiana, uses the da Vinci Surgical System to perform hysterectomies, myomectomies and the treatment of endometriosis.

Brown said while it is often called a “robot,” the da Vinci Surgical System is incapable of making decisions or maneuvering on its own. Rather, every surgical maneuver must be performed by a highly trained surgeon. While sitting at the ergonomic console, the surgeon controls the system, which translates hand movements into smaller, more precise movements.

“One in three women in the U.S. will need a hysterectomy before age 60,” Brown said. “Traditionally, this surgery was performed as a more invasive open abdominal hysterectomy that required a significantly large incision and extensive recovery time. Unfortunately, the fear of pain brought on by this procedure compiled with being out of commission for weeks caused many women to suffer silently rather than seek treatment. The da Vinci has revolutionized the practice of medicine, particularly gynecologic surgery.”