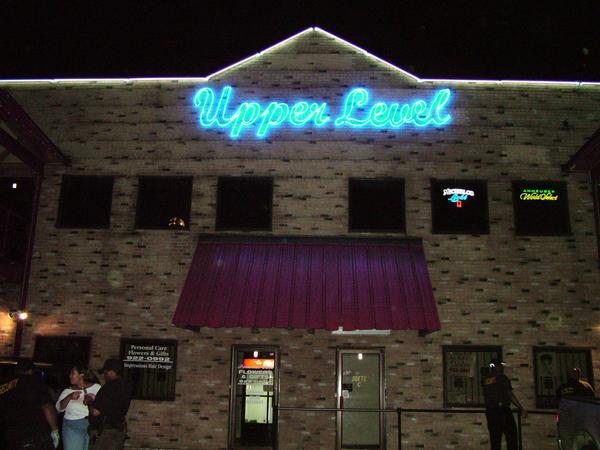 Hinds County Chancery Judge Dewayne Thomas has ordered that a popular Jackson nightclub be shut down, calling the club a “public nuisance.”

On Monday June 16, 2008, Thomas issued a court order that The Upper Level Sports Bar and Grill, located at 4125 W. Northside Drive be closed until several requirements are met. The forced closing came in response to a shooting inside the club on May 18, 2008 where three people were injured.

In the 30-page opinion document issued by Thomas, the judge states investigations have proven that the club has had 21 incidents occurring between Jan. 1, 2006, and May 18 inside the club filed by the Jackson Police Department.

“This opinion is basically the work of a political hack,” said Defense Attorney Chokwe Lumumba.

Lumumba and his legal team feel that the opinion of the judge is political because of the judge’s relationship with Sheriff Chief Malcolm McMillan.

The requirements include the purchasing of a $1 million premises liability insurance policy, providing employee personnel files, mandating closing at or before 2 a.m., hiring experienced security individuals at the company’s expense, providing the chief of police and court a copy of the security assessment, allowing Jackson police and sheriff officers entry in the club at any time during operation hours, and showing proof of reopening conditions being met, as well as the club owner purchasing a $50,000 bond to be forfeited to the City of Jackson if any violations of the injunction are made.

Jackson resident Betty McCree said that she didn’t have a problem with the club being opened, but felt that more security should be in place.

“It needs to be closed until they (club owners) get themselves together,” said McCree. “Parents want to know that their children are going somewhere safe. We can say all day don’t go to a certain place, but they are going to go wherever they want.”

McCree has personal ties to the security issue being the aunt of 21-year-old LaKia Williams of Ridgeland who was killed in a 2005 shooting incident that happened outside of the nightclub.

But attorneys for the club said that the club should not be held responsible for or targeted because of the shooting.

“The shooting happened almost two football fields away from the Upper Level,” said Lumumba. “It was a tragic occurrence, but to blame the club for something that happened outside the club and that far away is unfair. The incident had nothing to do with the Upper Level, but a dispute that had been created at the Metrocenter Mall.”

Local and neighboring business owner Miclarre said he thinks the Upper Level is being unfairly targeted because crime happens everywhere.

“There was just a fight at a McDonald’s recently. Are they going to shut that down,” said Miclarre. “The closing of this club is going to set the city up for people to hang out outside, in parking lots, creating more crime.”

Defense attorneys complied a list that included 26 shootings at other Jackson nightclubs that were not forced to close.

“This was not the only shooting, so why close down the Upper Level,” asked Miclarre.

In 2005, club owner Sandra Moore Johnson filed a court order banning JPD officers from all affiliations and entry into the club unless for emergency situations.

However, that is now one of the stipulations required for the club’s re-opening.

Attorneys for the club said they are weighing their options as to whether or not they will proceed with the requirements made by Judge Thomas or file an appeal.