By Mike Householder and Scott Bauer,

A black man shot multiple times, apparently in the back, by police in Wisconsin is paralyzed from the waist down and has “eight holes’’ in his body, the father of victim Jacob Blake said.

The shooting in broad daylight Sunday by police in Kenosha, captured on cellphone video that quickly spread on social media, ignited new protests over racial injustice in several cities. It comes three months after the death of George Floyd at the hands of Minneapolis police set off demonstrations around the United States and touched off a wider reckoning on race.

Blake’s father, also named Jacob Blake, told the Chicago Sun-Times in a story published Tuesday that he didn’t know if his 29-year-old son’s paralysis would be permanent. The older man was traveling from North Carolina to be with his son, who is being treated in a Milwaukee hospital.

“I want to put my hand on my son’s cheek and kiss him on his forehead, and then I’ll be OK,’’ the father told the newspaper. “I’ll kiss him with my mask. The first thing I want to do is touch my son.’’

Blake’s father said that he learned Sunday night that officers had shot his son eight times and shortly thereafter he watched the video, which appears to show his son being shot in the back.

Ben Crump, a civil rights attorney representing the family, said three of Blake’s sons – aged 3, 5 and 8 – were in the car at the time of the shooting. Crump scheduled a Tuesday afternoon news conference in Kenosha with Blake’s family members to address the shooting.

The father has not returned multiple messages left by The Associated Press.

He is slated to speak at a March on Washington commemoration  Friday organized by the Rev. Al Sharpton. His father and the victim’s grandfather, Jacob Blake Sr., was a prominent minister and civil rights leader in the Chicago area who helped organize a march and spoke in support of a comprehensive housing law in Evanston, Illinois, days after the 1968 slaying of the Rev. Martin Luther King Jr.

The officers were placed on administrative leave, which is standard practice in such cases. Authorities released no details about them and did not immediately respond to requests for their service records.

Since the shooting, anger has spilled into the streets of Kenosha and other cities, including Los Angeles, Wisconsin’s capital of Madison and in Minneapolis, the epicenter of the Black Lives Matter movement this summer following Floyd’s death.

Hundreds of protesters defied an 8 p.m. curfew Monday night, massing in downtown Kenosha. Some set fire to buildings, cars and dumpsters, threw bottles and shot fireworks and then clashed with officers in riot gear, including 125 members of the Wisconsin National Guard, who deployed tear gas as they guarded the courthouse.

A city block was cordoned off Tuesday, so officials could survey damage. Several storefronts were badly damaged. Smoke filled the air and visibility was low as firefighters used water cannons on still smoldering buildings.

“Nobody deserves this,’’ said Pat Oertle, owner of Computer Adventure. Computers were stolen, and the store was “destroyed,’’ she said.

“This accomplishes nothing,” Oertle said. “This is not justice that they’re looking for.’’

Earlier Monday, when Kenosha Mayor John Antarmian moved a news conference from a park to inside the public safety building, a crowd rushed to the building and a door was snapped off its hinges before police in riot gear pepper-sprayed the crowd. 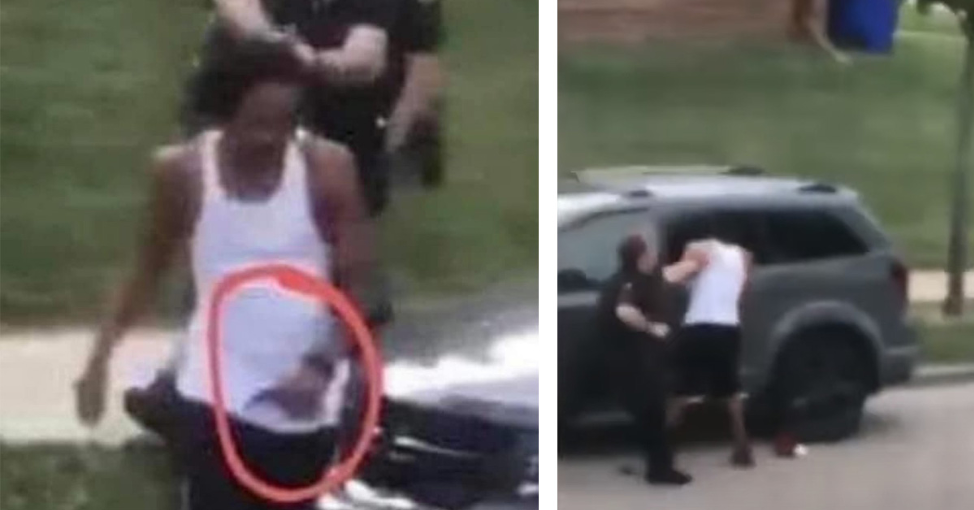 U.S. Sen. Ron Johnson and U.S. Rep. Bryan Steil, both Republicans, called on Democratic Gov. Tony Evers to do more to quell the unrest. Steil said he would request federal assistance if necessary.

A Wisconsin state lawmaker said Evers and Lt. Gov. Mandela Barnes, who is black, encouraged violence with their comments after the shooting.

“They did not call for peace. They did not encourage calm,’’ Republican state Sen. Howard Marklein said. “They did encourage people to jump to conclusions and take negative action.’’

Evers’ spokeswoman did not immediately respond to a request for comment.

Evers was quick to condemn the shooting in Kenosha and Monday called on the Republican-controlled Legislature to take up a package of police reform bills in a special session next week. But Republicans showed no interest in doing that.

In Madison, about 500 protesters marched to the state Capitol Monday night, and some broke windows, stole from stores and sprayed graffiti along the way. Police used tear gas and pepper spray on the crowds and six people were arrested, according to Madison police.

In Minneapolis, 11 were arrested after breaking windows at the county jail on Monday night. One police officer suffered a broken hand in an altercation with demonstrators, the sheriff’s department said.

Police in Kenosha, a city of about 100,000 in between Milwaukee and Chicago, said they were responding to a call about a domestic dispute when they encountered Blake Sunday.

The man who said he made the cellphone video, 22-year-old Raysean White, said he saw Blake scuffling with three officers and heard them yell, “Drop the knife! Drop the knife!” before the gunfire erupted. He said he didn’t see a knife in Blake’s hands.

In the footage, Blake walks from the sidewalk around the front of his SUV to his driver-side door as officers follow him with their guns pointed and shout at him. As Blake opens the door and leans into the SUV, an officer grabs his shirt from behind and opens fire while Blake has his back turned. Seven shots can be heard, though it isn’t clear how many struck Blake or how many officers fired.

Police did not say whether Blake was armed or why police opened fire, they released no details on the domestic dispute, and they did not immediately disclose the race of the three officers at the scene.

The family of Jacob Blake held a press conference Tuesday, Aug. 25, in Kenosha, WI. Among the speakers was Blake’s mother, Julia Jackson. She said she did not want violent protests. “Let’s use our hearts, our love and our intelligence to work together to show the rest of the world how humans are supposed to treat each other.”

The Wisconsin Department of Justice is leading the investigation into the shooting, which is expected to take several weeks.