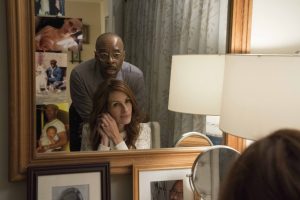 Holly (Julia Roberts) and Neal (Courtney B. Vance) are raising a family in a quaint country home in upstate New York ostensibly far removed from the sort of woes which plague the inner city. It’s Christmas Eve, and we meet Holly in church where she’s patiently watching three of her four kids practicing for the Christmas pageant.

However, looks can be deceiving, since missing from the idyllic picture is her eldest child, Ben (Lucas Hedges). For, the troubled 19 year-old has been living at a drug rehab center where he’s managed to keep clean for the past 77 days.

But Ben has left the facility without permission to be with the folks over the holidays. And the trouble starts when he breaks into the house when nobody’s there upon his arrival.

Understandably, Holly and Neal have different reactions to Ben’s return. She naively welcomes her Prodigal Son with open arms. Meanwhile, his African-American stepdad is very skeptical about allowing the addict to stay, pointing out that, if he were black, he’d probably be in prison rather than a halfway house.

Neal’s not only concerned about the prospect of Ben using again, but about the welfare of Lacey (Mia Fowler) and Liam (Jakari Fraser), his impressionable, young offspring with Holly. By contrast, teenage stepdaughter Ivy (Kathryn Newton) is well aware of Ben’s tendency to relapse, and is dead set against an impromptu reunion.

Unfortunately, headstrong Holly gets the final say. Against her better judgment and Ben’s own warning that he can’t be trusted, she agrees to a one-day visit. What ensues is a harrowing 24-hour nightmare the gullible mom will come to regret.

Thus unfolds Ben Is Back, a timely cautionary tale written and directed by Peter Hedges (Pieces of April). It stars his son Lucas in the title role opposite Julia Roberts who proves quite convincing as a mom in denial who becomes increasingly frazzled over the course of the misadventure.

As chilling a depiction of the suburban opioid epidemic as you are apt to find onscreen.

Rated R for drug use and pervasive profanity

To see a trailer for Ben Is Back, visit: https://www.youtube.com/watch?v=MI9NdYktzfE

The “12 Strong” Interview with Kam Williams   A Spirited Tête-à-Tête with the Talented Athlete-Turned-Thespian Trevante Nemour Rhodes was born in Ponchatoula, Louisiana on February 10, 1990, but raised in Little Elm, Texas from the […]