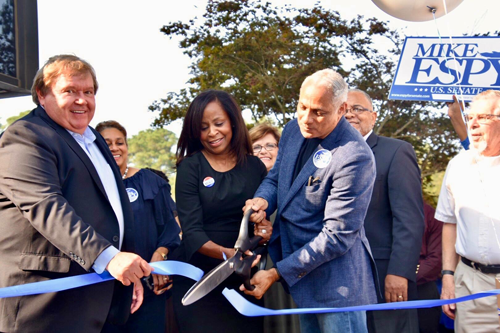 Espy and wife Portia are joined by supporters at ribbon cutting.

Momentum is building around the Mike Espy for United States Senate Campaign. Fresh off the heels of a recently released statewide poll showing Espy gaining ground among key constituent groups, Espy and his team held an official grand opening of his campaign office.

“This is an exciting time for all of us. We’re just about two months away from this election and we have a clear path to victory,” Espy told the crowd of more than 200 supporters from across the state. “Our polling shows us leading in a close three-way race, and that is confirmed by our opponents’ polling. We need everyone here and all your friends and family to help us build on this momentum.”

The poll, conducted by The Mellman Group, surveyed 600 voters statewide representing the likely November 2018 electorate. Interviews were conducted by telephone August 1 thought 7, 2018, using a registration-based sample of cellphones and landlines. The margin of error is +/- 4 percentage points at a 95 percent level of confidence, with a higher margin of error for subgroups.

The poll also shows Espy’s rising appeal over race and party, picking up 52 percent of the African-American vote, but also gaining 28 percent of the non-GOP white vote – a key constituency.

“I’m very pleased with the encouraging results of this poll,” Espy said. “I have a proven record of recruiting jobs, reducing government debt and improving the quality of life for my constituents.This poll is a clear illustration that our message is being well-received by voters who recognize that I am the candidate to cut through the political rhetoric and represent all Mississippians in Washington.”

A very impressive crowd gathered to share in the excitement, including Jackson’s mayor Chockwe Antar Lumumba, who talked about Mississippi’s history. “As we’ve seen, a country that has experienced great booms, or even when it has been in a recession, Mississippi has stayed the same because it has always been at the bottom,” Lumumba said. “And so we need that leadership to go to Washington to change that dynamic. No matter whether you consider yourself Democrat or Republican, we need a Mississippi that is better represented.”

Espy, Lumumba said, “has not only made history in the past, but is prepared to make history right now.”

Espy often says, “I’m running to do something…not to be something,” when asked why he is seeking office now after more than 20 years out of public service.