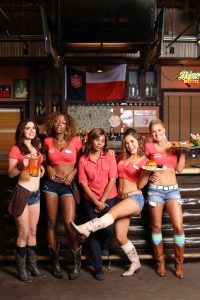 Double Whammies is an unremarkable watering hole located along a desolate strip of highway outside Austin, Texas where truckers and regulars can slip in and out quietly without drawing much attention to themselves. The seedy sports bar, a la your typical Hooters, is known for its booze and finger food served by scantily-clad waitresses in cut-off jeans and low-cut tops.

The place is run with an iron fist by Lisa Conroy (Regina Hall), a very-protective den mother who takes seriously her mission to shield her employees from perverts inclined to cross a line to fraternize improperly. Though she shows her tough side to the clientele, the tenderhearted manager handles her staff with big kids’ gloves.

Lisa’s motley crew ranges from naive newcomers to hardened pros, and she’s blessed with a knack for knowing precisely what sort of support each needs. Unfortunately, she’s not appreciated by Double Whammies’ owner, Cubby (James Le Gros), probably because the club always seems to have a host of unresolved woes.

For example, at the moment, there’s a burglary in progress thanks to a hapless perp who got himself stuck in a ceiling vent. Lisa knows the show must go on, so instead of summoning the police, she has her own way of dealing with such a distraction which keeps the wheels turning but frustrates her skeptical boss. That’s just the way it goes at this quirky haunt.

Written and directed by Andrew Bujalski (Beeswax), the film features many of the hallmarks of the low-budget genre on which the Mumblecore maven built his career. The picture effectively paints a poignant portrait of a day in the life of a humble, dedicated, working-class heroine just trying to make a buck.

Remember how the indie-flick Paterson (2016) managed to elevate a lowly New Jersey poet/bus driver? Well, this tale of female empowerment pulls off a similar feat. Raw-edged cinema verite’ cut to the bone, if that’s your taste.

Distributor: Magnolia Pictures
To see a trailer for Support the Girls, visit: https://www.youtube.com/watch?v=gp-8oB53P7k

Film Review by Kam Williams   Separated Pet Embarks on Perilous Journey in Heartwarming Family Adventure Life has proven to be quite a challenge for Bella (voiced by Bryce Dallas Howard) from the start. Soon […]

Film Review by Kam Williams   Mutant Monsters Decimate the Windy City in Old-Fashioned Horror Flick Hey, sci-fi fans, did you find it hard to stomach the sight of a human mating with another species […]

Who We Be: The Colorization of America

November 26, 2014 Online Editor Entertainment Comments Off on Who We Be: The Colorization of America