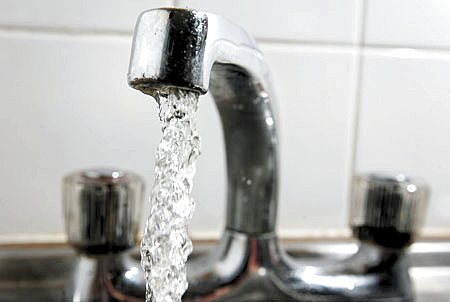 Wednesday, Mayor Chokwe Antar Lumumba held a press briefing to publicly announce technical violations that have been found in the techniques used to treat water at the O.B Curtis Water Treatment Plant as it relates to the Optimized Control Plan for the City of Jackson.

Lumumba told reporters, “We are here to acknowledge that the city has failed one of the process standards for maintaining the proper pH within our system.”

While the city’s drinking water supply does not test positive for lead, Lumumba explained that the technical violation stems from a decision to retrofit the water treatment system which was originally designed to only process liquid lime, not soda ash.

“The City of Jackson under my father’s administration, learned that there were troubles or issues with the water treatment facility being able to maintain a proper pH through what we had as a liquid lime system at that time. Former Mayor Chokwe Lumumba at that time took action to incorporate that in the budget to purchase a new system. Before he had the opportunity for that new system to be purchased, he asked if it was an emergency such that it required immediate action and he discovered that it was something that the system would hold out until the next budget incorporated a new system. At that time he placed it in the budget.

“The Yarber administration later took that item out of the budget. You may recall, at that time there were a few lead tests that came up in a few homes somewhere around 2014, 2015 and there were efforts made at that time to retrofit the liquid lime system into a system which uses soda ash. What we have recently discovered is that the retrofitted system is not an adequate solution to the process. Because we are dealing with a machine that was not intended for the use of soda ash, there has been trouble in terms of soda ash clumping as it leads into the distribution system. And so that has led to a process violation.”

In December 2017, the Mississippi State Department of Health issued an Optimized Corrosion Control Plan for the City of Jackson drinking water system which requires the city to maintain a minimum pH of 9.0 for drinking water as it enters the water distribution system from both of its water treatment plants.

The Plan further requires that the pH in the water distribution system remain at 8.6 and above.

The purpose of the plan and the minimum pH requirements is to help prevent lead and copper from dissolving into the drinking water.

According to Robert Miller, director of Public Works, the City of Jackson was notified in July 2018 that the city failed to consistently maintain the minimum pH of 9.0 for drinking water from the City’s O. B. Curtis Water Treatment Plant and which is a violation of the City’s Optimized Corrosion Control Plan during the months of January 2018 to June 2018. The City also failed to consistently maintain a pH of at least 8.6 in the monthly water distribution system monthly samples.

To clarify, Miller told reporters, “When I say that we failed to meet it consistently, we met the target regularly but there were occasions of hours where there were excursions where the pH was either below or above that level.”

A notice of violation has since been mailed to customers in the City of Jackson system.

Miller told reporters that the specific challenge faced by the city is that the soda ash being used to control the pH has been particularly difficult to dose in the current system, citing the difficulty with soda ash reacting to high levels of humidity in the air to form rock-like clumps that are very difficult to process in the system.

“We anticipate that we may need to replace the equipment in the near future. Meanwhile, we have implemented temporary chemical feed equipment that is having better, but not complete success. This temporary equipment is being optimized while implementation of a new feed system is being designed for construction and installation,” said Miller.

The City of Jackson has emphasized that this is not an emergency situation, but the following precautions are advised for Jackson water consumers to consider:

• Households should never use hot water for drinking or cooking.

• Residents should clean out their faucet aerators by unscrewing the aerator at the tip of the faucet and removing any particles or sediment that have collected in the filter screen.

• Any child five years of age or younger and any pregnant woman should use filtered water or bottled water for drinking and cooking.

• Baby formula should be “ready to feed” or prepared using only filtered water or bottle water.

• Parents with children five years or younger should contact their child’s pediatrician or primary care provider to make sure that adequate lead screening and blood testing have been performed.

For more information, please contact the City of Jackson Water Laboratory at 601 960-2723.