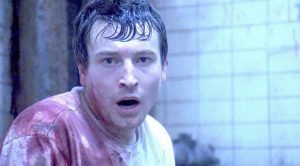 Mechanic Grey Trace (Logan Marshall-Green) is a dying breed. He’s an an old school, grease monkey who can roll up his sleeves and repair classic cars without the help of diagnostic computers.

One fateful day, he asks his wife Asha (Melanie Vallejo) to follow him in her car so he can return the Pontiac Firebird that he’s just finished working on to its owner, high-tech mogul Eron King (Harrison Gilbertson). The eccentric billionaire has a subterranean laboratory hidden just beneath the ocean shoreline. He proudly tells the Traces about his company’s latest invention, an implantable computer chip with a mind of its own.

On the way home, Asha’s self-driving sedan inexplicably-malfunctions and drives them to a seedy side of town where it crashes after careening around a corner. The couple is subsequently set upon by a sadistic gang that murders her and leaves him a quadriplegic.

When Eron learns of Grey’s misfortune, he offers the grieving widower an opportunity to walk again. All that’s involved is installing a tiny, talking, computer circuit in his spinal cord called Stem (Simon Maiden). The only hitch is that having Stem inside is like sharing your body with another brain.

The operation successfully transforms Grey from a bed-ridden cripple into a superhuman vigilante capable of tracking down and exacting vengeance on his muggers in a bloody reign of terror. But to get even with the creeps, he has to temporarily allow Stem to take charge.

The plot thickens when Stem seems to have a hidden agenda. Might this powerful entity be attempting to wrest total control of Grey’s body permanently? And towards what end?

That is the engaging premise of Upgrade, a riveting, revenge thriller written and directed by Leigh Whannell, creator of the Saw and Insidious horror flick series. As this timely film further unfolds, it magically morphs right in front of your eyes from a futuristic sci-fi into a thought-provoking, exploration of the hidden dangers of artificial intelligence.

A timely cautionary tale you don’t want to miss!

To see a trailer for Upgrade, visit: https://www.youtube.com/watch?v=gEnRNIvEKu8

The Shape of Water

Film Review by Kam Williams   Monster Meets Girl in Romantic Sci-fi Fantasy The Shape of Water is the early favorite in this year’s Oscar sweepstakes. The sci-fi fantasy about love across species lines was […]

Film Review by Kam Williams Gamers Search for Easter Egg in Ultimate Virtual Reality Adventure It is 2045, a time when the planet has devolved into a desolate dystopia marked by a combination of pollution, […]