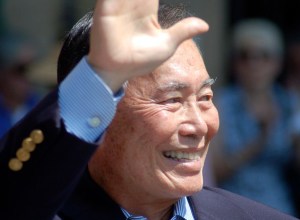 Legendary Thespian Reflects on Mistreatment of Japanese-Americans during WWII

Despite an enviable career spanning six decades, George Takei remains best- known around the world for his founding role in the acclaimed television series Star Trek, in which he played Lt. Hikaru Sulu, helmsman of the Starship Enterprise. But his story goes where few stories have gone before.

From a childhood spent with his family wrongfully imprisoned in Japanese-American internment camps during World War II, to becoming one of the country’s leading figures in the fight for social justice, LGBTQ rights, and marriage equality, George is still a powerful voice on issues ranging from politics to pop culture.

Here, he talks about his short film, American, a historical drama about the above-mentioned roundup and relocation of over 100,000 Japanese-American citizens during World War II.

Kam Williams: Hi George, thanks for the interview.

George Takei: Thank you, Kam. Where are you located?

KB: I see. My grand-niece considered going there. But she decided to attend Brown in Providence instead.

GT: And now here you are in Princeton. [Chuckles]

KW: Yeah, and my son went Princeton and my wife worked at Princeton, but I’ve never been affiliated with the University. I think Princeton’s a little stodgy and preppy compared to Brown which I think is thought of as the most open-minded and progressive of the Ivies.

GT: I’ve spoken at Brown, but I’ve never even visited Princeton, so I don’t know what it looks like, but she was very impressed with the campus.

KW: Both the campus and the town are beautiful.

GT: Well, I’ll make a point of visiting Princeton one of these days.

KW: Let me know when you’re coming, and I’ll give you a great tour.

KW: In preparing for this interview, I was stunned to learn the breadth and depth of your career. You’ve done so much more than Star Trek, both before and since the TV series.

GT: I’m glad you did some research on me.

KW: What inspired you to mount your latest project, American? The movie made me weep.

GT: That chapter of American history is still so little-known. Were you familiar with the imprisonment of loyal, American citizens of Japanese ancestry?

KW: Yes, since I’m also an attorney, I studied the landmark Korematsu vs. the United States case in my Constitutional Law class. That Supreme Court decision was as shameful as Dred Scott.

GT: One of the reasons I’ve made it my life’s mission to raise awareness about it is that east of the Rockies, so many people I consider to be well-informed and well educated are totally aghast when I tell them about my imprisonment as a child. They can’t believe anything like that was done in the United States by the U.S. government. That’s why we produced a Broadway musical about it [Allegiance] and founded the Japanese American National Museum where I served as one of the founding chairs of the board. It’s an official affiliate of the Smithsonian. I think you get a better understanding of our country and of our democracy by know that chapter of our history.

KW: Is that the actual museum in the movie?

KW: What really hit home was seeing the handbills directing Japanese-Americans to relocate to one of ten internment camps where they were expected to recite the Pledge of Allegiance every day, despite being imprisoned behind barbed wire fences.

GT: I There were also half-a-dozen Justice Department camps which were much, much harsher. And one of those eventually came to be known as the “Segregation Camp.” There’s a very complex history to those four years of imprisonment. When Pearl Harbor was bombed, young Japanese-Americans rushed to their recruitment centers to serve in the military, just like so many of their peers. But this act of patriotism was met with a slap in the face. They were rejected and categorized as “Enemy Aliens.” Isn’t that crazy?

KW: It is hard to believe U.S. citizens could’ve been mistreated in that way?

GT: They were volunteering to fight and possibly die for this country. To call these young volunteers, born and raised in America, “The Enemy,” was insane and totally irrational. And they certainly weren’t “Aliens,” so both words in the categorization “Enemy Alien” were nonsensical. Instead, the authorities announced a curfew. On the West Coast, all Japanese-Americans had to be home by 7 pm, and had to stay inside until 6 in the morning. Next, we discovered that our bank accounts were frozen. Entire life savings were gone! We couldn’t even pay our mortgages or withdraw a few dollars to cover day-to-day living expenses. Then, on February 19, 1942, the President [FDR] issued Executive Order 9066 directing that approximately 120,000 of us be rounded up with no charges. You need charges to be able to challenge in a court of law.

KW: I know you were only 5, but do you still remember the day when they came for your family?

GT: Yes, I remember how my parents got me up very early one morning, together with my younger brother and our sister who was still an infant. They dressed us and told us to wait in the living room while they hurriedly did some last-minute packing. While we were just gazing out the front window, we suddenly saw two soldiers carrying rifles with shiny bayonets march down the driveway and stomp up the porch. They began banging on the door with their fists, and ordered ordered us out of our own home at gunpoint, literally. My brother and I had to wait for our mother to come out. When she did, she had our baby sister in one arm, a huge duffel bag in the other, and tears were streaming down her cheeks. And my father followed her with two huge suitcases and a rucksack on his back. I will never be able to forget that terrifying morning.

KW: Where was your family taken?

GT: From Los Angeles two-thirds of the way across the country to Arkansas. When it rained, the whole camp turned into a swamp. Can you imagine?

KW: No. I’m so sorry about what you and so many other American citizens had to endure when you were a little boy. We’ve run out of time, George, but I’d love to continue this conversation soon, since I want to hear more about your ordeal, and there are so many other topics I didn’t get to touch on.

To see a trailer for American, visit: https://youtu.be/XpNy0dhZsfs