To ensure everyone understands the significant impact Head Start has had and is still having on the state of Mississippi, advocates, lawmakers, parents, community leaders, students and friends gathered on the steps of the state capitol last week to raise their voices in
collective praise.

A federal program that launched in 1965, Head Start serves children from birth to age five and focuses on language, literacy and social
and emotional development for children from low-income families.

The program is federally funded but recently has faced stiff competition with the onset of federal and state funded Pre-K programs. Still, advocates and allies say the program is undaunted with its core mission and that the children of Mississippi are succeeding because
of Head Start.

Nita Norphlet-Thompson, the executive director for the Mississippi Head Start Association, said the rally and press conference were
organized in an effort to bring together advocates of Head Start to share evidence of the program’s effectiveness. “For more than half a century, Head Start has been a vital part of the early childhood landscape in Mississippi, preparing children and strengthening families,”
Norphlet-Thompson said. “Statewide research proves that Head Start is helping children in Mississippi make signifi cant gains in language development, literacy, physical development and math skills. Head Start is putting children on a lifelong path to success, and we’re here in Jackson today to make sure our lawmakers know that!” 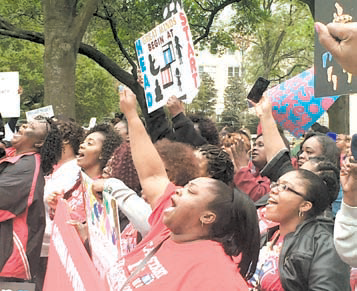 One particular Head Start agency is having enormous success in Central Mississippi. Friends of Children of Mississippi, Inc. (FCM) under the leadership of its Executive Director Marvin Hogan. According to the FCM website, it is a highly efficient, team-based, nonprofit human service organization. During the past 50 years, FCM has successfully served over 149,000 children and families.

This agency has expanded its scope of work and according to Norphlet-Thompson, they are equipping families to succeed and have created
successful partnerships with job centers and workforce programs in Madison County.

“Over the past 15 years, FCM has provided child care services for over 5,000 parents who were engaged in job training, early childhood development/education training and/or job search activities.” Hogan said his agency is in the middle of a five-year noncompete grant cycle. “Based on our work, we are in year three of this five year grant with hopes of being able to continue,” he said.

Hogan knows the benefits and impact that Head Start agencies across the country are having on families. “Our work will be measured for years to come,” he said. “Our state succeeds based on the investment we make in children early on.”

With excitement, Hogan praised the newly crafted FY2018 omnibus appropriations bill that President Donald Trump recently signed into law. “This bill gives us a $610M increase over our FY 2017 funding and helps us expand our work.”

• $216 million for a cost of living adjustment (COLA) for Head Start staff (approximately a 2.2 percent increase, which is in line with inflation).
• $260 million for partial day, partial-year programs to extend the duration of their services to better meet the needs of working families.
• $115 million for Early Head Start expansion and child care partnerships. This includes $15 million for COLA for existing partnership grantees and $100 million for new grants “to continue to equally prioritize EHS Expansion and EHS-CC partnerships, as determined by the needs of local communities, as done in previous grant competitions for this program.”

The funding increase in the FY 2018 omnibus will mean that programs will have additional resources to better support teachers and staff, more children will have access to full-day and full-year early child education and more infants and toddlers will start off life with the Head Start advantage.

At the rally last week, some members of the Mississippi Legislative Black Caucus were on hand to lend their voices in support of the work.

“We stand with you today and will continue to stand with you because the work you do is important and extremely valuable to this state,” said State Representative Sonya Williams Barnes who serves as chairperson of the caucus and represents District 119.

Tuesday, Oct. 9, was a day described by several golfers as being ‘picture perfect’ weather-wise for being on the course playing. Yet it was a day that members of the NonIron Golf Club set aside to make a contribution to the Boys & Girls Club of Metro Jackson.

Members of the golf club gathered at the Sonny Guy Golf Course on Woodrow Wilson Drive in Northwest Jackson and participated in a media event by offering quick and helpful tips to some of the youth from the Boys & Girls Club before making the donation…. […]

Dr. King celebration not a day off but a day to reflect

As a national holiday, Dr. Martin Luther King Jr. is celebrated every year on the third Monday of January; his actual birthday is Jan. 15. While federal offices, banks, schools and businesses close out of respect for Dr. King’s leadership in the Civil Rights Movement, many have plans to take this not as a day off but as a time to reflect on the principles he espoused and on what needs to be done to complete his dream…. […]