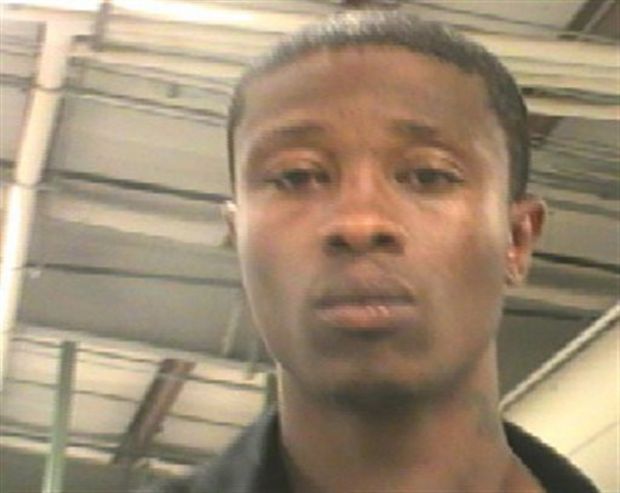 This undated photo provided by the City of New Orleans shows Travis Boys. The New Orleans Police Department said Officer Daryle Holloway was shot while transporting Travis Boys, who managed to get his handcuffed hands from behind his back to the front, grab a firearm and shoot the officer. A manhunt was underway for the 33-year-old Boys, according to Police Chief Michael Harrison. (City of New Orleans via AP)

(AP) A man believed to have shot and killed a New Orleans police officer was arrested Sunday morning by a rookie officer and his trainer who spotted the man getting onto a city bus, authorities said.

Travis Boys, 33, is accused of slipping into the front seat of a police vehicle while handcuffed and shooting Officer Daryle Holloway, 45, who was taking him to jail Saturday morning on a charge of aggravated assault.

“To my understanding, he got on the bus after spotting the officers. And the officers saw that and then he got off the bus and then was apprehended,” Police Superintendent Michael Harrison said.

Boys had broken handcuffs on his wrist when he was arrested after a 24-hour manhunt, Harrison said.

He said Boys was taken to a hospital for treatment of apparent dehydration. Video by WVUE-TV showed Boys strapped onto a gurney and being put into an ambulance, his head slumped over.

He will be booked with first-degree murder of a police officer, aggravated escape and illegal possession of a firearm, as well as the aggravated assault charge, Harrison said.

Harrison said authorities recovered a .40 caliber weapon believed to have been used by Boys to shoot the police officer. Boys was frisked before being transported, so authorities are investigating how he had the gun, Harrison said.

“That is under investigation so we realize that’s an obvious issue. So there are safety concerns, procedural concerns between training and internal investigations we’re going to find out how that happened to insure that that absolutely never happens again,” Harrison said.

He said officers also spotted Boys on Saturday, starting a chase during which Boys crashed a pickup truck into a house in the St. Roch neighborhood, then ran. An intense search including police dogs failed to find him, Holloway said.

“We don’t know how he was able to elude us, but we were relentless,” he said.

Holloway, 45, had been a member of the New Orleans Police Department since 1992. He was the father of three children.

Harrison said Holloway joined the department a year after he himself did so.

“Until yesterday, he was a guy who was full of life. He told jokes … You couldn’t be around him for more than a minute or two and he would become your friend,” said Harrison.

Harrison said he met with two of Holloway’s children and Holloway’s former wife at the hospital after he died. “As a new chief, it was the hardest thing I’ve ever had to do in my life,” Harrison, who became chief last year, said Saturday.