BALTIMORE (AP) — National Guard troops fanned out through the city, shield-bearing police officers blocked the streets and firefighters doused still-simmering blazes early Tuesday as a growing area of Baltimore shuddered from riots following the funeral of a black man who died in police custody.

The violence that started in West Baltimore on Monday afternoon — within a mile of where Freddie Gray, 25, was arrested and placed into a police van earlier this month — had by midnight spread to East Baltimore and neighborhoods close to downtown and near the baseball stadium.

It was one of the most volatile outbreaks of violence prompted by a police-involved death since the days of protests that followed the death of Michael Brown, an unarmed black man who was shot and killed during a confrontation with a white police officer in Ferguson, Missouri, last summer.

At least 15 officers were hurt, including six who were hospitalized, police said. There were 144 vehicle fires, 15 structure fires and nearly 200 arrests, according to numbers provided Tuesday morning by Howard Libit, a spokesman for the mayor’s office.

Aerial footage Tuesday morning from Baltimore station WJZ-TV showed a firefighter spraying the burnt out shell of a large building as an American flag fluttered nearby on an untouched building.

State and local authorities pledged to restore order and calm to Baltimore, but quickly found themselves responding to questions about whether their initial responses had been adequate.

Baltimore Mayor Stephanie Rawlings-Blake was asked why she waited hours to ask the governor to declare a state of emergency, while the governor himself hinted she should have come to him earlier.

“We were all in the command center in the second floor of the State House in constant communication, and we were trying to get in touch with the mayor for quite some time,” Gov. Larry Hogan told a Monday evening news conference. “She finally made that call, and we immediately took action.”

Asked if the mayor should have called for help sooner, however, Hogan replied that he didn’t want to question what Baltimore officials were doing: “They’re all under tremendous stress. We’re all on one team.” 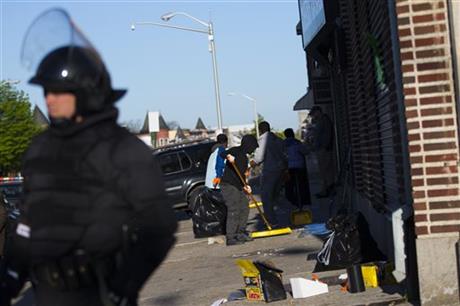 Rawlings-Blake said officials believed they had gotten the unrest that had erupted over the weekend under control “and I think it would have been inappropriate to bring in the National Guard when we had it under control.”

But later on, Baltimore Police Commissioner Anthony Batts made it clear events had become unmanageable. “They just outnumbered us and outflanked us,” Batts said. “We needed to have more resources out there.”

Batts said authorities had had a “very trying and disappointing day.”

Police certainly had their work cut out for them: The rioters set police cars and buildings on fire in several neighborhoods, looted a mall and liquor stores and threw rocks at police with riot gear who responded occasionally with pepper spray.

“I understand anger, but what we’re seeing isn’t anger,” Rawlings-Blake said. “It’s disruption of a community. The same community they say they care about, they’re destroying. You can’t have it both ways.”

Gov. Hogan was temporarily moving his office to Baltimore on Tuesday. A spokeswoman for the governor said Hogan would be visiting sites around the city and planned to work out of state offices in downtown Baltimore with cabinet members and senior staffers.

U.S. Attorney General Loretta Lynch, in her first day on the job, said she would send Justice Department officials to the city in coming days. A weeklong, daily curfew was imposed beginning Tuesday from 10 p.m. to 5 a.m., the mayor said, and Baltimore public schools announced they would be closed Tuesday.

Maj. Gen. Linda Singh, adjutant general of the Maryland National Guard, said up to 5,000 troops would be available for Baltimore’s streets.

Singh said they will be acting at the direction of Baltimore police.

Maryland Congressman Elijah Cummings and about 200 others, including ministers, tried unsuccessfully to quell the violence at one point Monday night, marching arm-in-arm through a neighborhood littered with broken glass, flattened aluminum cans and other debris. As they got close to a line of police officers, the marchers went down on their knees. They then rose to their feet and walked until they were face-to-face with the police officers in a tight formation and wearing riot gear.

But the violence continued, with looters later setting a liquor store on fire and throwing cinder blocks at fire trucks as firefighters labored to put out the blazes.

Monday’s riot was the latest flare-up over the death of Gray and came amid a national debate over police use of force following the high-profile deaths of several black men in encounters with police — from the Brown death in Ferguson to the deaths of Eric Garner in New York and Walter Scott in North Charleston, South Carolina.

Gray was black. Police have declined to specify the races of the six officers involved in his arrest, all of whom have been suspended with pay while they are under investigation.

While they are angry about what happened to Gray, his family said riots are not the answer.

“I think the violence is wrong,” Gray’s twin sister, Fredericka Gray, said late Monday. “I don’t like it at all.”

The attorney for Gray’s family, Billy Murphy, said the family had hoped to organize a peace march later in the week.

Gray was arrested on April 12 after making eye contact with officers and then running away, police said. He was held down, handcuffed and loaded into a van without a seat belt. Leg cuffs were put on him when he became irate inside.

He asked for medical help several times even before being put in the van, but paramedics were not called until after a 30-minute ride. Police have acknowledged he should have received medical attention on the spot where he was arrested, but they have not said how he suffered a serious spine injury. He died April 19.

BALTIMORE (AP) — A judge acquitted a Baltimore police officer of manslaughter and other charges Monday in the death of Freddie Gray, a black man who was critically injured in a police transport van. It […]

MOSS POINT, Mississippi (AP) — A funeral will be held next week for Josie Wells, a deputy U.S. marshal who was killed in the line of duty. Arrangements were announced Thursday by Wells’ alma mater, […]

HATTIESBURG, Miss. (AP) – A funeral was held Saturday for one of two Mississippi police officers shot to death a week ago during a traffic stop. Thousands of mourners and law enforcement officers from around […]