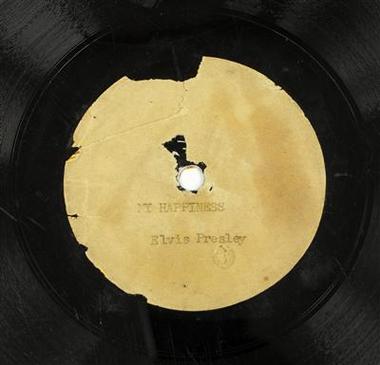 MEMPHIS, Tennessee (AP) — An acetate recording of the ballad “My Happiness,” the first song Elvis Presley ever recorded, has sold at auction for a total of $300,000.

An undisclosed buyer placed the winning bid Thursday at Graceland, the museum and tourist attraction that was Presley’s former home. Bidding began at $50,000.

Presley recorded it in 1953 at Sun Records, the Memphis studio operated by Sam Phillips. Presley, then 18, paid $4 for the recording. As the story goes, Presley left Sun and went to the home of friend Ed Leek to listen to it. But Presley, whose family did not have a record player, left the record there.

Leek had kept the record, and after he and his wife died, their niece inherited it. She contacted Graceland, and it was offered for auction.

A list and description of abandoned/unclaimed vehicles The auction will be held at the City’s Garage/ Impound Lot facility located at 4225-C Michael Avalon Street on Saturday, February 21, 2015 starting at 08:30 a.m.

MLK’s secretary selling collection, including page from `I Have a Dream’ speech

RIDGELAND, Mississippi (AP) — The Rev. Martin Luther King Jr.’s personal secretary is selling a collection from the early civil rights movement, including handwritten notes by King and a page from his “I Have a Dream” speech, what the auction house calls an unprecedented historical trove.

Maude Ballou worked as King’s secretary from 1955 to 1960, when King led the Montgomery Improvement Association and the Southern Christian Leadership Conference.

BALTIMORE (AP) — Babe Ruth’s 1918 contract with the Boston Red Sox has sold for more than $1 million, along with other baseball memorabilia up for auction in Baltimore. The contract was among about three […]