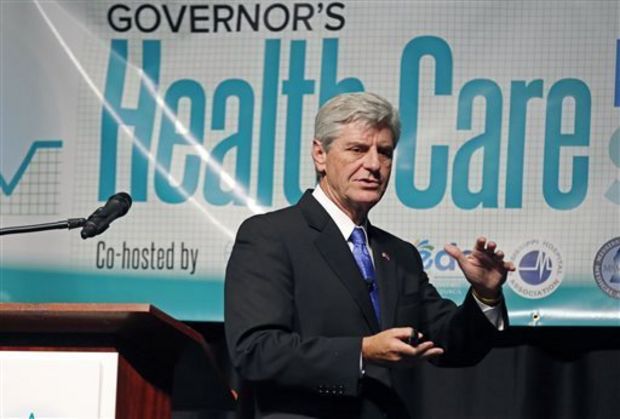 Wingate set a Nov. 5 hearing to further explore Bryant’s claims of harm that patients would suffer if Blue Cross doesn’t contract with the hospitals.

Wingate emphasized that he was not calling Bryant’s order illegal. However, he said that Blue Cross had met the legal hurdles for him to freeze the current status and keep six hospitals owned by HMA out of the insurer’s network.

The insurer sued Bryant Oct. 18 after he sent the company a letter saying he intended to issue the executive order covering all 10 HMA hospitals. Three days later, Blue Cross put the four hospitals back in network, but Bryant went ahead and issued his order Oct. 22.

Blue Cross argued before Wingate that Bryant’s order was unconstitutional, saying the governor should have given the insurer a due process hearing, couldn’t constitutionally force it to contract with another business, and was violating federal equal protection mandates.

Bryant had said that without the hospitals, Blue Cross would have an insufficient network under a state law meant to protect patients.

“We believe, and the judge, I think, has concluded, that our constitutional rights were violated,” he told reporters after the ruling.

Chaney had intervened in the lawsuit to argue that Bryant was overstepping his authority by issuing orders to the separately elected fellow Republican.

“This is certainly part of the legal process,” Bullock wrote in an email. “The governor will evaluate the court’s ruling and will continue to work with Attorney General Jim Hood to resolve this matter.”

Blue Cross, which had attacked Bryant personally in its lawsuit, was more conciliatory Monday.

“Despite a difference of opinions in this current situation, we feel certain that we share a common goal with Governor Bryant — to create a healthier state and a brighter future for all Mississippians,” spokeswoman Meredith Virden said in a written statement.

HMA, for its part, restated its desire to negotiate with Blue Cross. The hospital operator sued Blue Cross in June in state court for imposing a contract HMA hadn’t agreed to, leading Blue Cross to terminate contracts with all 10 hospitals.

“We will continue to attempt to work with Blue Cross Blue Shield of Mississippi to get all hospitals back in network,” said Dwayne Blaylock, CEO of River Oaks Hospital in Flowood, one of the six that are excluded.

JACKSON, Mississippi (AP) — Mississippi Gov. Phil Bryant has signed a new law designed to ensure teachers get a full paycheck in August, even if they work fewer days than usual because the school year […]

JACKSON, Mississippi (AP) — Gov. Phil Bryant has hired the former director of the Mississippi Department of Environmental Quality as a consultant. The contract with Trudy Fisher, dated Sept. 5, says she will advise the […]

PEARL, Mississippi (AP) — Gov. Phil Bryant has issued a state of emergency as severe weather approaches Mississippi. Bryant’s declaration Sunday says there’s a possibility of significant ice accumulation in the northern half of the […]