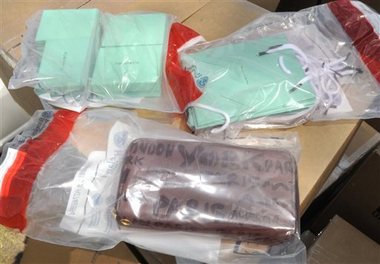 Ousainou Mahanera pleaded guilty last Monday in U.S. District Court in Gulfport. Sentencing is set for Jan. 27. He was indicted Aug. 20, but the case was sealed until his arrest in New Orleans in September.

The indictment filed in U.S. District Court in Gulfport, Miss., says Mahanera sold purses and other items that were fake versions of high-end brands like Louis Vuitton and Gucci.

The indictment said the items also include shoes and belts. Authorities say Mahanera sold them in March.

GULFPORT – Brittney Reese’s gold medal glistens just a brightly this morning as it did when the Olympic long jump champ showed it off to her Gulfport friends on Saturday.
Hundreds of South Mississippians came out to give Olympic Gold Medalist Brittney Reese a big welcome home Saturday night… […]

GULFPORT, Miss. (AP) – Attorneys for funeral homes suing a Mississippi coroner say he has acknowledged that he can’t remember ever sending a white person’s body to one of the county’s six black-owned funeral homes. […]