GREENVILLE – (AP) George “Boomer'' Scott, a three-time All-Star first baseman who hit 271 homers in a 14-year major-league career and is a member of the Red Sox hall of fame, died Sunday, July 28. He was 69. 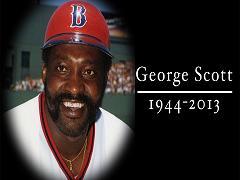 A three-time All-Star, Scott spent most of his career with the Boston Red Sox and Milwaukee Brewers. He hit 27 homers with 90 RBIs during his rookie season in 1966 – second for a Red Sox rookie only to Ted Williams – and had his best year with the Brewers in 1975, when he hit 36 homers and had 109 RBIs.

The Red Sox all-time leader for first basemen in games played, Scott was inducted into the franchise's hall of fame in 2006. The Red Sox observed a moment of silence at Fenway Park before Monday night's game against the Tampa Bay Rays on July 28.

“In losing George Scott, we have lost one of the most talented, colorful, and popular players in our history,'' Red Sox historian Dick Bresciani said. “He had great power and agility, with a large personality and a large physical stature. He could light up a clubhouse with his smile, his laugh, and his humor – and he was the best defensive first baseman I have ever seen. We will miss him, and we send our condolences to his family.''

Scott was listed at 6-foot-2 and over 200 pounds in his playing days, but he was surprising nimble in the field. He won eight Gold Gloves – third all-time among first basemen behind only Keith Hernandez and Don Mattingly – including five with the Brewers.

“This is a very sad day for all of us connected to the Brewers,'' the team said in a statement. “George Scott was charismatic, an early star of the team and one of the finest defensive players in the game. `Boomer,' as he was affectionately known to fans, will be remembered as a colorful player on and off the field and his five Gold Glove Awards as a Brewer are an accomplishment that will be difficult to top. The entire Brewers community wishes to express their condolences to the Scott family.''

Scott played with the Red Sox from 1966-71 and again from 1977-79. He hit 154 home runs – or “taters,'' as he called them – with the Red Sox, batting.257 with 158 doubles, 38 triples, and 562 RBIs. He also played five seasons for the Milwaukee Brewers between stints in Boston and finished his career with the Kansas City Royals and the New York Yankees.

BALTIMORE (AP) — Babe Ruth’s 1918 contract with the Boston Red Sox has sold for more than $1 million, along with other baseball memorabilia up for auction in Baltimore. The contract was among about three […]

A 61-year-old man has been ordered to serve 16 years in prison for stabbing and robbing a woman who was selling shrimp from the back of her van in Waveland. The Sun Herald reports Larry K. Hurt, of Waveland, was sentenced in Hancock County Circuit Court.

Hurt pleaded guilty to the armed robbery and aggravated assault of Ly Le, a woman known by locals as “the shrimp lady.” He stabbed her in the left shoulder and robbed her of $159 on Nov. 13, 2011. […]

The Clarion-Ledger reports that the snake was found Friday night by two Madison residents who saw a large snake crossing a road. […]