With the theme “Change is Happening,” First Lady Michelle Obama came to Clinton Wednesday, Feb. 27, as the first stop on her anniversary tour with Let’s Move. She spent much of the day at Northside and Eastside Elementary School with students and teachers and addressed the select public gathered at 2 p.m.

The First Lady was joined by TV personality and child nutrition advocate Rachael Ray to highlight the new healthy school lunches that are now being served across the nation.

Thanks to the bi-partisan Healthy, Hunger-Free Kids Act, championed by First Lady Obama and Ray, and signed into law by the President in 2010, the 32 million students who eat lunch provided by their school are now seeing more fruits, vegetables, low-fat or fat-free milk varieties, and whole grains; less saturated fat, trans fat, and sodium; and proper portion sizes on their lunch trays.

Obama and Rachael Ray also hosted a cooking competition between school chefs to highlight the new healthier school lunches. This portion of the visit will air on The Rachael Ray Show March 11.

They chose to highlight school lunches in Mississippi, which was rated the most obese state in the nation for several years, because the state’s childhood obesity rates have declined by 13 percent among elementary school students in recent years. Mississippi is one of several states to show decreases in childhood obesity.

The Clinton Public School District mobilized the entire community to make their schools healthier to support their children’s physical wellness and academic achievement. With leadership from the Superintendent, Board of Education, parents, students and community leaders, Clinton made healthy schools a top priority and implemented district-wide changes to bring physical activity and nutritious choices to students – all with no additional funding.

Dr. Phillip Burchfield, Clinton School Superintendent, stood before the room of parents, students and public officials from across Mississippi and led them in reciting the Pledge of Allegiance.

He was followed by Rachael Ray who expressed how inspired she was to see the progress among Mississippi school children in the reduction of obesity rates and increase in healthy living. She also commended the First Lady for launching the “Let’s Move” campaign, adding that she has worked with the First Lady in the White House Garden and cooked with its food.

Citing many of the earlier statistics and reasons for coming to Clinton, the First Lady added, “I am proud of school chefs all across this state and across the country. These people had to totally transform their work in a matter of months and also address the picky eaters. And they kept at it because they love our kids and want them to achieve their God-given potential.

“We can solve this problem. We see it here in Mississippi and in Pennsylvania and in California. Let’s truly double down, keep stepping up and put in our imagination and efforts.” 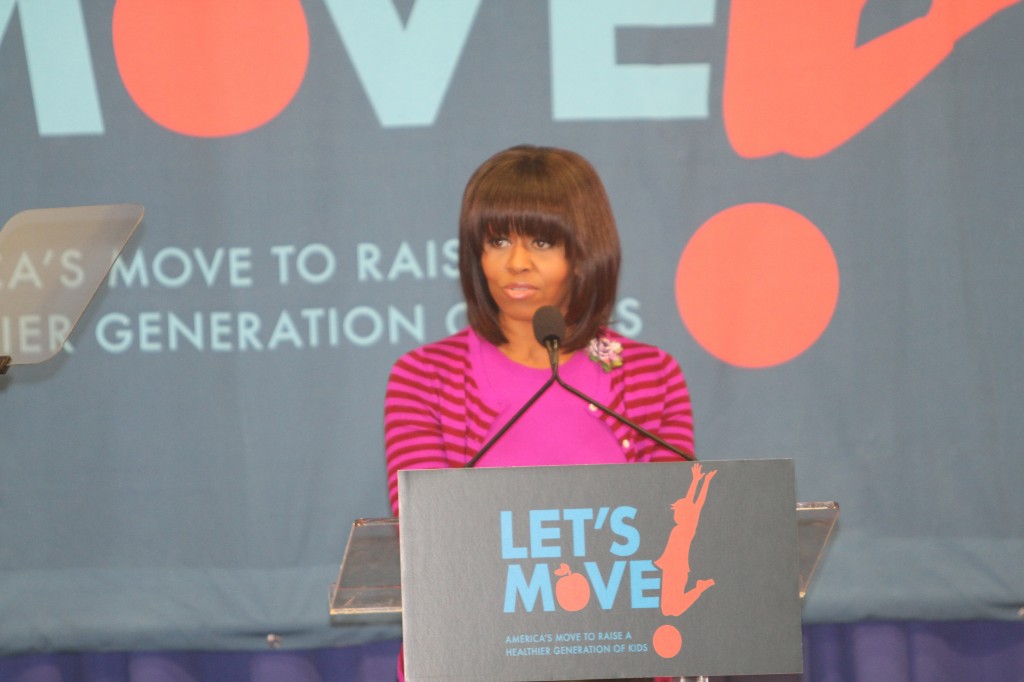 Michelle Obama is making a house call on “The Dr. Oz Show.”

The show’s producers said the first lady will tape an appearance Wednesday to discuss new provisions of her “Let’s Move!” campaign and the Presidential Youth Fitness Program. […]

For some girls, First Lady rivals Beyonce’ as a role model