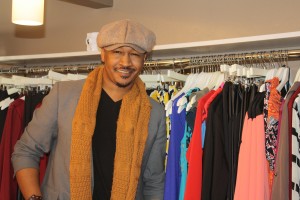 Jason Bolin, 30, is a progressive young black. He is a man with a profession filled with hopes and dreams and aspirations to go further in life. He thinks about how he can help others to become unselfish, sharing, paying it forward while maintining a focus on family values.

Meeting Bolin dispels the myth that some young black men are in crisis mode, either on their way to jail or subject to being shot down on the streets.

At the Fondren Fashion House, 310 Mitchell Avenue, Bolin talked freely about the path he has taken as a celebrity fashion stylist and visual expert. He said he has his “everyday people” and his “celebrity” people.

“I work with my everyday people, getting them styled and revamping their wardrobes. I help them clean out their closets while getting them ready for the do’s and don’t’s of fashion.

“Then I have my celebrities whom I work with most of the time to make sure their wardrobes are together for a red carpet appearance, a performance or whatever their needs may be.”

Bolin is Mississippi born and educated. He attended Alcorn University to pursue a degree in advanced technology. His family’s calling for him was to design and build homes, but he said he always wanted to be with the stars. His parents, Billy and Gloria Bolin, discouraged him from going into the entertainment business. So he did the next best thing, which was to “dress the stars.”

Asked what was his inspiration to getting started, Bolin said he and wife, Nicole, “were newly weds and bored of working an 8 to 5 every single day.” Also they wanted to do something with purpose. So they started the Urban Education Fund and put on fashion shows to raise money to give to students for school supplies. That was eight years ago – starting the business at age 22.

He also has a virtual fashion magazine – www.denimmagazine.net. His 5-year-old son is named Denim, which he said started as a joke from their friends: “What are you all going to do with a baby, wrap him in denim?” And so Denim is the inspiration for the virtual magazine: “I want to have something to leave my son,” Bolin explained.

Fashion boot camps are Bolin’s way of paying it forward – helping others who want to get into the business but don’t know just how to do it. “I didn’t have any help when I started,” he said. “This industry is very, very, very fickle. We don’t teach each other how to become successful, because then we become each other’s competition.”

But Bolin said his faith is in God. “God’s assurance is that nobody can beat me at being me. We all have different gifts and we are still good at what we do individually. Or God would have taken 20 people and just made them all one person.”

The boot camp helps those who want to be fashion stylists to get training, whether in business etiquette or just on how to get started. He said most of the people who come to his boot camps are from other places – Los Angeles, Brooklyn, and Florida.

“No one has attended from Mississippi. The first year, I had eight people. The second year, 12, and this year I expect to have about 40. I get the word out through social media, which has been my lifesaver, using Instagram and Twitter.

Talking about the challenges he faces, Bolin said he still has to deal with stereotypes about Mississippians – that they are behind, fashionably. “We do get things later,” he said. “We don’t have the big stores like Sachs. But it doesn’t mean that I don’t have access to the world. I support local businesses who have fabulous pieces. We have people who are very trend savvy and know what to look for next week to stay ahead of the game.”

Whom would he like to dress? “Michelle Obama. And it will happen with preparation and the right timing. I would like to go to her with a u-haul full of designs.”

Bolin’s next fashion boot camp for those who want to get into the fashion stylist and visual expert business will be March 2-3, 2013. Or if you just want to “up your style,” give him a call.

By Stephanie R. Jones Contributing Writer Isaiah Madison’s name might not be one that readily comes to mind but his impact on higher education in Mississippi is as remarkable as the red clay soil that […]