DETROIT, Mich. – Just in time for Black History Month, a stamp honoring the mother of civil rights, Rosa Parks, will be unveiled on what would have been her 100th birthday – Feb. 4 in Detroit. 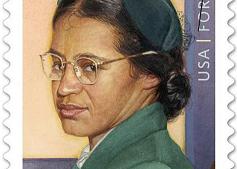 Parks’ refusal to surrender her seat to a white passenger on a bus during the days of segregation in Montgomery, Alabama, spurred a city-wide boycott that lasted about 381 days. Parks stand also introduced a young newcomer, Martin Luther King, Jr., to the fight for civil rights.

Parks once said it was what happened to a Chicago youth, Emmett Till, in Money, Mississippi several months earlier, that contributed to her taking a stand for equal rights.

Because of Parks, the city of Montgomery had no choice but to lift the law requiring segregation on their public buses. Parks received many accolades during her lifetime, including the NAACP’s highest award.

The unveiling ceremonies are reportedly scheduled for Feb. 4 at the Charles H. Wright Museum of African American History in Detroit and the Henry Ford Museum in Dearborn, Michigan.

That change is slated to begin in August 2013.

Thompson said the decision made by the USPS will have an adverse impact on residents who live in rural areas throughout Mississippi – often a great distance from postal facilities. […]

Students learn about Emmett Till and the importance of justice

August 15, 2012 Monica Land Education, News, Statewide News Comments Off on Students learn about Emmett Till and the importance of justice

From Alcorn State University
MONEY – “I am Emmett Till and I stand for justice,” chanted 11 emotional high school students standing in the rain in front of what was once known as Bryant’s Grocery Store in Money, Mississippi, where a 14-year-old black youth was brutally killed by white murderers who escaped justice.

Pictured: Scholars reading the commemorative sign at the former Bryant’s Grocery Store site in Money, Mississippi. (Alcorn State photo)
The journey to the historic site in July was a part of the Alcorn State University Children Defense Fund Freedom School project for high school-aged students. They read the book “Getting Away with Murder: The True Story of the Emmett Till Case” and watched the PBS video documentary before traveling to the place where the astonishing story took place.
“I remember reading the book as a servant leader intern and being appalled at the fact that I was learning of this critical moment in American history for the first time in my life – and I was college student. None of my American history and African American history classes mentioned Till at all,” shared Gralon Johnson, special assistant to the president at Alcorn and co-executive director of the CDF Freedom School program. “So, when the decision was made for high school-aged students to participate in Alcorn’s Freedom School program, I realized that it was a perfect opportunity to expose and connect our scholars to Till’s story in a meaningful and lasting way.”
Till’s tortured and battered body was pulled from the Tallahatchie River on Aug. 28, 1955.
Johnson further said Level 4 scholars participating in… […]

By Monica Land The Injustice Files: At The End Of A Rope airs tonight SILVER SPRING, Md. – Lynchings have long been a part of Mississippi’s dark past. Since the days of slavery, many innocent, […]