Some citizens decided to express their disgust with the election results publicly on social media and on the streets.

Donald Trump, the outspoken businessman and reality TV star told his Twitter followers Tuesday night he wants Americans to march on Washington to protest the “great and disgusting injustice” of Barack Obama being re-elected as U.S. president.

After president Obama was projected as the winner of the 2012 presidential election, Trump expressed his outrage on Twitter.

“We can't let this happen. We should march on Washington and stop this travesty. Our nation is totally divided!,” he wrote.

“Lets fight like hell and stop this great and disgusting injustice! The world is laughing at us.”

“This election is a total sham and a travesty. We are not a democracy!”

“Our country is now in serious and unprecedented trouble…like never before.”

“Our nation is a once great nation divided!” 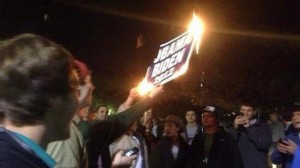 Closer to home, in Oxford, Mississippi, President Obama's re-election led to public protest that some media outlets characterized as a riot.

According to witnesses, around midnight on Wednesday morning a disturbance started near the center of the University of Mississippi (Ole Miss) campus, where students gathered to protest the Tuesday night re-election of President Obama.

The protest originally started on social media and ended with over 400 students protesting on the campus.

Some photos show groups of protesters lighting Obama-Biden signs on fire in response to the presidential election results.

She continued, “Students of all races yelling on rebel drive. Lots of racial slurs.”

More details were provided in a statement released by the University of Mississippi:

University police were notified by students shortly before midnight Tuesday that Twitter chatter was indicating students were gathering near the student union to protest the results of the election.  The officers found 30-40 students gathered in front of the union, and over the next 20 minutes the gathering had grown to more than 400 students, many of whom were chanting political slogans. The crowd was ordered to disperse by university police, and after about 25 minutes students had returned to residence halls. About 100 students gathered again at one hall, and university police dispersed the group and made two arrests for disorderly conduct, including one for public intoxication and one for failure to comply with police orders.

“While we are grateful that there were no injuries and there was no property damage, we are very disappointed in those students who took a very immature and uncivil approach to expressing their views about the election,” said University of Mississippi Chancellor Dan Jones.  “The gathering seems to have been fueled by social media, and the conversation should have stayed there.”

“Unfortunately, early news reports quoted social media comments that were inaccurate. Too, some photographs published in social media portrayed events that police did not observe on campus. Nevertheless, the reports of uncivil language and shouted racial epithets appear to be accurate and are universally condemned by the university, student leaders and the vast majority of students who are more representative of our university creed.” 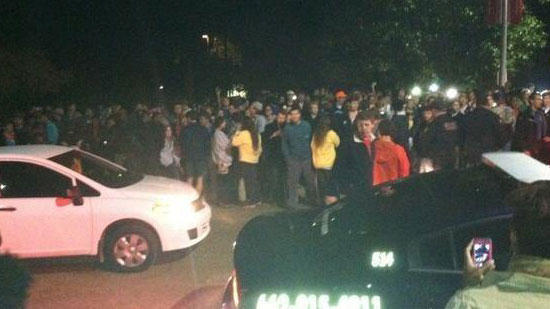 Mississippi still has $872 million to spend from $5.5 billion in Katrina recovery funds

The remaining $872 million is part of $5.5 billion Congress gave the state to rebound from Katrina, which struck in August 2005, killed 238 people in Mississippi and caused tens of billions of dollars in damage, most heavily in coastal counties… […]

Obama vs Trump: Dispute erupts over who would have won

By JOSH LEDERMAN HONOLULU (AP) — In an alternate universe in which President Barack Obama ran for a third term against Donald Trump, who would have won? No surprise: The president and the president-elect disagree. […]