One would be hard pressed to find an African American who had not heard of the historic Tuskegee Airmen, the black pilots who broke the color barrier during World War II, trained at Tuskegee, Ala., especially now that a 2011 movie was released in their honor.

Some may know about the Buffalo Soldiers who formed the 9th and 10th  calvary and 24th and 25th infantry of the U.S. Army starting in 1866. Native Americans coined the phrase “Buffalo” soldier because of the texture of the men’s hair.

But also one would be hard pressed to find a hand full of people, including African Americans, who know much about the Montford Marines, stationed at New River,  N.C. – the first group of black Americans who served in the U.S. Marines between the years 1942 – 1949.

These men served honorably during World War II, although they did not have full freedom at home. The Montford base was closed in 1949, a year after President Harry Truman signed an executive order desegregating the U.S. military.

It may be only immediate family members who know 87-year-old John W. Jones of Jackson, who was a corporal in the Montford Marine unit, serving in World War II after entering the Marines in 1943.

Jones was honored recently with the Congressional Gold Medal at his church, Holy Family Catholic Church on Forrest Avenue in Jackson. He and his wife, Rubye, were brought in from their nursing homes to receive the medal ceremoniously presented by Captain Kevin Stuart, representing the Marine’s Anti-Terrorism battalion Charlie Company. 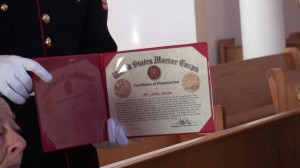 Jones is a part of U.S. history and African American history and among 400 Montford Marines still living at the time Congress presented the medal to over 100 of them at the U.S. Capitol in Washington, D.C., June 27, 2012.

Many of the Montford Marines were unable to travel due to age and illness, however the order was to present their medals to them wherever they were found. Jones served in the South Pacific and received his Congressional Gold Medal some 69 years later.

The Congressional Gold Medal is “the U.S. Congress’s highest expression of national appreciation for distinguished achievementts and contributions.”

Family members witnessing the event for Jones were his sister Margaret Lewis, nephew and niece Joseph and Lenora Lewis.Lenora is a Marine sergeant in California. Jones also accepted the medal in memory of his brother, Melvin, deceased, who also was a Montford Marine.

Jones’ voice is very weak now but his smile spoke volumes, acknowledging his pride for this medal.

Dr. Robert Smith, a family friend sent a letter that read: “We are happy to know that you are one of the heroes of WWII who stood up to protect our freedom, representing us well around the world and coming back to Mississippi to serve in a role to help us gain our freedom in Mississippi and the United States.”

Prison officials issued an alert Saturday afternoon advising that an inmate serving a life sentence for murder was missing after working on prison grounds at Parchman.

Forty-eight-year-old Michael Dowda was last seen around 3 p.m., Sept. 22 wearing a MDOC white shirt and green and white striped pants. Authorities said Dowda was on a work detail with maintenance at the time he disappeared and they believe he drove away in a 2005 Silverado truck that was on the prison grounds. […]

Dorothy Carter, a former stage actress who starred in the adaptation of the groundbreaking novel “Strange Fruit” on Broadway and later became an educator and a children’s book author, has died after battling bladder cancer. She was 94.

Security is tight in a murder trial in Pike County Circuit court involving a Summit man accused of beating and robbing a check cashing company employee.

On trial is 26-year-old Kendrick Cowart, on charges of murder, armed robbery and two counts of conspiracy. […]