As severe weather looms over the metro and surrounding areas, Gentiva Hospice Executive Director Janet Butts and her staff were busy making sure their patients were safe, secure and had the supplies needed in case of a disaster.

“I have had a stressful past two days,” Butts said.

According to the National Institute on Aging, “People with Alzheimer’s disease can be especially vulnerable in disaster situations. Their impaired memory and reasoning skills may severely limit their ability to cope. For caregivers, it is important to have a disaster plan that incorporates the special needs of the person with Alzheimer’s.”

Many caregivers surmise that preparing for a natural disaster is easier than preparing for the devastation of Alzheimer’s. Butts found herself consoling a crying caregiver while standing in the middle of a street Tuesday (the eve of Hurricane Katrina’s seventh anniversary).

During the incident, she could not help but reflect on the invasion of her own personal storm: her grandmother’s battle with Alzheimer’s. She said it was a challenge for her and her family, but if she had to do it all over again, she would.

About 11 years ago, Butts, a Clinton, Miss. resident, noticed some changes in her grandmother Maude (aka “grandma”) who lived alone in Itta Bena, Miss. Butts’ grandfather and father had died. “My father was an only child who died at age 39,” Butts said. Prior to Alzheimer’s, her grandmother was a beauty shop owner in the small Delta town. Her grandfather served as the postmaster.

She said at one point, her grandmother had fallen and hurt herself but was not aware of it. “During one of her visits with us, I discovered her in the kitchen boiling toast and frying an egg on a plate over the burner, I somehow grabbed the hot plate from her,” Butts said. She said realizing the plate could have blown up, she and her family decided not to allow “grandma” to return to Itta Bena.

“She was really angry at me,” Butts said.

She said while she does not regret it, caring for her grandmother was one of the most challenging things she has ever done in her life. It changed their lifestyle. Butts said caring for the elderly is what she has always done for a living and as a passion, “but it is very different when it is your loved one.”

“It’s sad, it’s hard. Just picture the fact that you have to discipline your grandmother as you would a child. That’s not normal, especially when you’ve been taught all of your life to respect your elders,” she said.

Butts urges caregivers, based on her experiences, to keep some type of identification bracelet on their loved ones bearing their name and address. Her grandmother wandered away while they were home. Wandering is a common symptom of Alzheimer’s. Six in 10 people with dementia will wander, according to data from the Alzheimer’s Association. 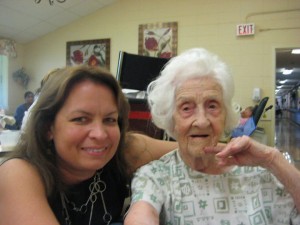 “That was the longest four hours of my life,” said Butts. She said the police found her grandmother in a ditch, near a stop sign on Clinton-Raymond Road. “She was frightened and she would not talk to the officers,” said Butts.  She said the police called to inform them that a Jane Doe had been taken to the Central Mississippi Medical Center (CMMC). Her grandmother fit the description.

After that, Butts made sure they had an alarm system installed. She put a baby monitor with visual capabilities in her grandmother’s room. “Her room became her own little environment because she rarely wanted to come out of it, so we would visit her all the time in her room, until she would get tired of us being  there,” she said.

Like others, Butts also advises caregivers to take care of themselves and take time for self while caring for a loved one with Alzheimer’s. She applauds the support she received from her husband and children. “My daughter has become a natural, like me, in her passion to care for the elderly,” Butts said. “My kids are most compassionate when it comes to situations like this.

Butts said she has always had a passion and love to take care of the elderly. “I don’t know, but I’ve been like a magnet to the elderly. Most of my friends are over 80,” she laughingly told The Mississippi Link.

Butts also encourages caregivers to “learn to live in their moment whatever that moment is.”

“Most days, grandma would call me ‘Stella,’ her mother. So, I became Stella, although Stella weighed nearly 400 pounds. Every day is a new day; embrace it.”

Her grandmother died in March 2011. “We were always close. I was her first grandchild. When she was in her right mind, she once told me that she wanted me to take care of her when she was old, and that’s what I did,” Butts said. “I love and miss her so much.”

September is World Alzheimer’s Month and Butts and her family are expected to be among hundreds taking a step in the right direction toward fighting Alzheimer’s by raising money and participating in the 2012 Jackson Walk To End Alzheimer’s, Sept. 15, at 9 a.m. at the Mississippi Museum of Art – Art Garden in downtown Jackson. To participate, log on to www.alz.org/walk or call 1-800-272-3900. Be sure to click on the Jackson, Miss. walk.

Mayor Harvey Johnson Jr. is scheduled to issue a proclamation at the Tuesday, Sept. 4, City Council Meeting at 10 a.m. to emphasize the walk and World Alzheimer’s Month.

There will also be a free workshop for caregivers on the early stages of Alzheimer’s Tuesday, Sept. 18 at 10 a.m.in the Baptist Healthplex 102 Clinton Parkway, Clinton.

JACKSON, Mississippi — The state agriculture commissioner says no people or animals were killed or seriously injured in a large fire at the Mississippi Agriculture and Forestry Museum in Jackson. Commissioner Cindy Hyde-Smith says it […]

JACKSON, Mississippi (AP) — A former official of the federal Transportation Security Administration in Mississippi has appealed his murder conviction in the 2011 death of a co-worker. The appeal from Ruben Orlando Benitez is among […]