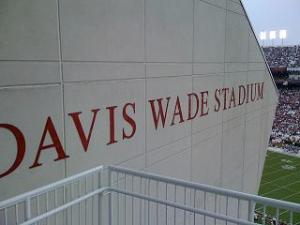 The Davis Wade Stadium at Mississippi State is about to get a $75 million expansion that will add more than 6,000 seats to the existing stadium, pushing the capacity to 61,337. The Bulldogs have sold out 16 straight games and have a waiting list for season tickets.

STARKVILLE – (AP) – Mississippi State will begin a $75 million expansion of Davis Wade Stadium, with the project expected to be finished ahead of the 2014 season.

The school announced that the expansion will add more than 6,000 seats to the existing stadium, pushing the capacity to 61,337. It also includes plans for a second high-definition video board, premium seating, restrooms and concession stands.

Mississippi State president Mark Keenum said expansion was necessary because of growing demand from alumni. The Bulldogs have sold out 16 straight games and have a waiting list for season tickets. Even with the expansion, Mississippi State’s stadium capacity will rank just 12th out of 14 programs in the cash-laden Southeastern Conference.

“A lot of people are expanding stadiums because they think it’s an arms race or something,” Mississippi State coach Dan Mullen said. “We’re doing it because we have a need to do and our fans have shown it.”

The expansion will be funded by $68 million in bonds and $7 million in private donations. Keenum said he was confident that added revenue from the expansion would help pay for the project.

“We think our gameday experience at Mississippi State is one of the best in the nation,” Keenum said. “And to be able to expand and create more opportunities for our alumni to attend and support our football team is exciting for us.”

Mullen has led Mississippi State to back-to-back winning seasons, including victories in the Gator Bowl and Music City Bowl. It’s the first time in more than a decade that the Bulldogs have won back-to-back bowl games.

“I think coach Mullen and our other coaches have really raised the bar of expectations for all Mississippi State football fans,” Keenum said.